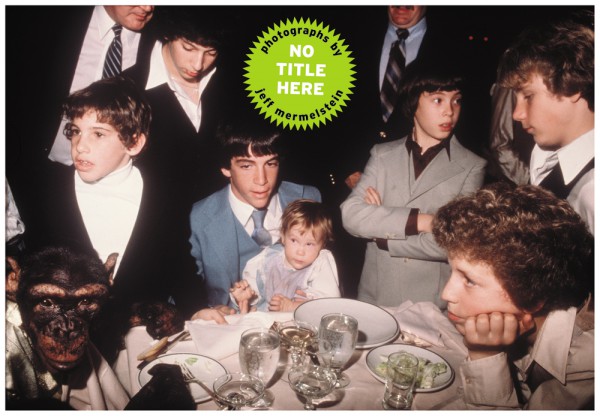 Jeff Mermelstein began photographing Asbury Park, New Jersey, in 1981 on a quest for taffy-rich colors and seedy atmospheres. Mermelstein was mesmerized by the sights: a pink lady at a baby parade; a startled bag lady dressed in red; a cat-show judge named Mr. Friend. Trips to Asbury Park and beyond soon grew to encompass a much broader spectrum of American life from commercial sets, trade shows, and wedding parties, to dog shows, mall grand openings, cocktail parties, and nearly anything jarring, disjointed, or surreal in daily life he encountered in-between.

Magazine assignments led Mermelstein to explore, among other far-out subject matter, the curious sights of animal acting, including legendary four-pawed performers Morris the Cat, Lassie, Benji, the Merrill Lynch bull, the Exxon tiger, and Zippy, a performing chimp. “I can still feel the excitement of hugging Zippy,” Mermelstein recalls, “and watching and photographing him in his bus and as he entertained at a bar mitzvah on Long Island.”

Inspired by these encounters with the odd and unusual, Mermelstein continues to this day to snap up scenes of vivid color, glitz, plastic, and artifice. No Title Here showcases his treasures from over twenty years of canvassing the land in search of the quirky, the absurd, the oddly lyrical, and the sympathetically funny sights it has to offer.

Jeff Mermelstein was born in New Brunswick, New Jersey, in 1957. His work has been exhibited in solo and group exhibitions worldwide, and is in the collections of The Library of Congress, Washington, D.C.; Art Institute of Chicago, Illinois; International Center of Photography, The New York Public Library, The Jewish Museum, and The Buhl Collection, all in New York; International Museum of Photography at George Eastman House, Rochester, New York; Princeton Museum of Art, and Johnson & Johnson Collection, both in New Jersey; Museum of Fine Arts, Houston, Texas; and Museum Ludwig, Cologne. The author of SideWalk, Mermelstein’s photographs have also been published in a number of collections and publications including Aperture, Artforum, Details, DoubleTake, Fortune, GQ (US & UK), Life, Nest, Newsweek, Stern, and Telegraph.