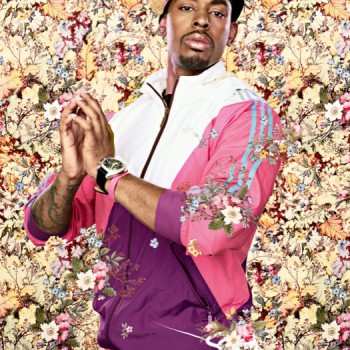 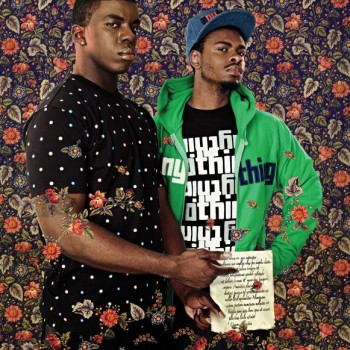 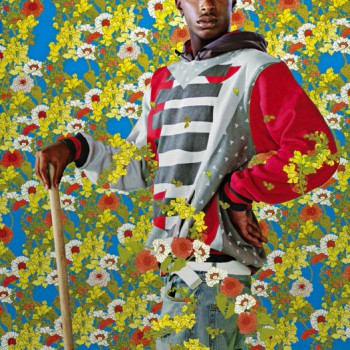 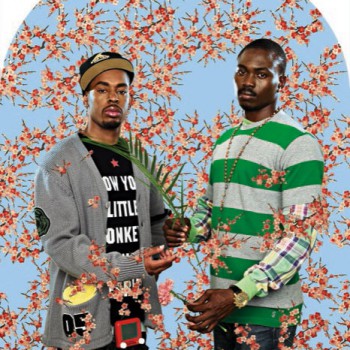 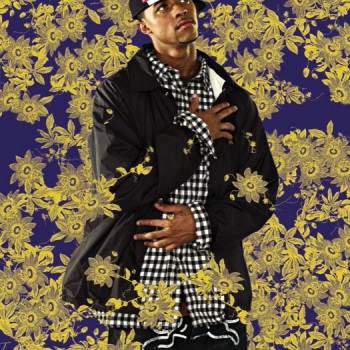 “For most of Kehinde Wiley’s very successful career, he has created large, vibrant, highly patterned paintings of young African American men wearing the latest in hip hop street fashion. The theatrical poses and objects in the portraits are based on well-known images of powerful figures drawn from seventeenth- through nineteenth-century Western art. Pictorially, Wiley gives the authority of those historical sitters to his twenty-first-century subjects.”
—National Portrait Gallery

“My intention is to craft a world picture that isn’t involved in political correctives or visions of utopia. It’s more of a perpetual play with the language of desire and power.”
—Kehinde Wiley

“Wiley inserts black males into a painting tradition that has typically omitted them or relegated them to peripheral positions. At the same time, he critiques contemporary portrayals of black masculinity itself…. He systematically takes a ‘pedestrian’ encounter with African-American men, elevates it to heroic scale, and reveals—through subtle formal alterations—that postures of power can sometimes be seen as just that, a pose.”
—Art in America

Los Angeles native and New York-based visual artist Kehinde Wiley has firmly situated himself within art history’s portrait painting tradition. As a contemporary descendent of a long line of portraitists—including Reynolds, Gainsborough, Titian, Ingres, and others—Wiley engages the signs and visual rhetoric of the heroic, powerful, majestic, and sublime in his representation of urban black and brown men found throughout the world. By applying the visual vocabulary and conventions of glorification, wealth, prestige, and history to subject matter drawn from the urban fabric, Wiley makes his subjects and their stylistic references juxtaposed inversions of each other, imbuing his images with ambiguity and provocative perplexity.

In Black Light, his first monograph, Wiley’s larger-than-life figures disturb and interrupt tropes of portrait painting, often blurring the boundaries between traditional and contemporary modes of representation and the critical portrayal of masculinity and physicality as it pertains to the view of black and brown young men. The models are dressed in their everyday clothing, most of which is based on far-reaching Western ideals of style, and are asked to assume poses found in paintings or sculptures representative of the history of their surroundings. This juxtaposition of the “old” inherited by the “new”—who often have no visual inheritance of which to speak—immediately provides a discourse that is at once visceral and cerebral in scope.

Without shying away from the socio-political histories relevant to the subjects, Wiley’s heroic images exhibit a unique modern style that awakens complex issues which many would prefer remain mute.

Kehinde Wiley received his MFA from Yale University in 2001. Shortly after, he became an artist-in-residence at the Studio Museum in Harlem. He is represented by Deitch Projects, New York, Rhona Hoffman Gallery, Chicago, and Roberts and Tilton, Los Angeles. His work has been exhibited internationally and is in the permanent collections of many museums, including the Brooklyn Museum, New York, the Miami Art Museum, Miami, and the Detroit Institute of Arts, Detroit.

Brian Keith Jackson is an award-winning author of three novels, playwright, and arts and culture writer. His work has appeared in publications and as wall text for private and public art institutions, as well as in The New York Times, National Public Radio, New York Magazine, the London Observer, Vibe, and Paper, among others. 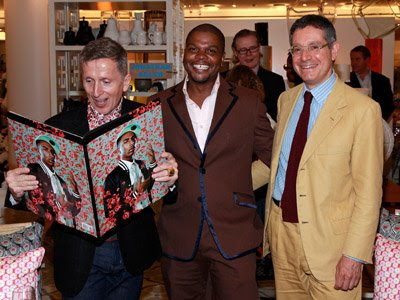