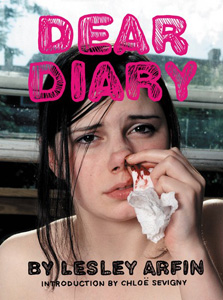 Following a remarkable run in its singular hardcover format
(over 20,000 copies in print after two printings) and having
captured a devoted fan base that continues to grow, Dear
Diary arrives in trade paperback.

Within only several months of its release, this highly acclaimed
title reached thousands of readers who sparked enthusiastic
discussions on MySpace Books, was covered exhaustively
on teen and literary blogs alike, and repeatedly hit the top of
numerous must-read lists at Amazon. With glowing reviews
from national publications like Jane and Paper magazines, who
have generated an electrifying buzz with praise of its unique
sensibility and sincerity, Dear Diary is undoubtedly on its way
to becoming a teen classic in the vein of Go Ask Alice and The
Perks of Being a Wallflower.

“…this is the best concept for a book ever…. It’s an inspiring
trip from her middle school mean-girl days to the college
student/hardcore heroin addict to today’s rehabilitated,
awesome woman…. Dear Diary is totally going to be the next
Go Ask Alice….”
—Jane

When Arfin wrote about Sheryl Rosenthal (it’s funny how you
remember everyone’s first and last name like that) making her
feel “retarded” back in sixth grade, the world was a dark, lonely
place and she could see no light at the end of the tunnel.
When she discovered heroin, things got even worse. Today,
with the perspective only rock bottom can give you, Lesley
looks back at the apocalypse that was adolescence and asks,
“What the hell was I talking about?”

“It’s Please Kill Me meets Are You There, God? It’s Me,
Margaret, and it’s as addictively delicious as a tube of Pringles.”
—Paper

This book is a collection of a girl’s funniest diary entries from
12 to 25 years old. She updates each entry by tracking down
the people involved and asking awkward questions like, “Do
you remember when I tried to beat you up?” Sometimes old
friends apologize. Sometimes they become new enemies. No
matter who she talks to about the days when we all discovered
sex, drugs, and rock n’ roll, one thing becomes abundantly
clear: boys are totally immature.

“Here’s your chance to have all the benefits of a tortured
adolescence without the shitty childhood. Congratulations!”
—Sarah Silverman

Lesley Arfin was born in Long Island, NY in 1979. She
graduated with a BA from Hampshire College in 2001.
Besides writing the “Dear Diary” column in Vice, she has
written a number of other articles for the magazine, including
“The Vice Guide to Guilty Pleasure” and “The Vice Guide to
Finding Yourself,” both of which appeared in The Vice Guide to
Sex and Drugs and Rock and Roll. Her work has also appeared
in Jane, i-D, Nylon, Paper, and Fashion Now 2 (Taschen,
2005). She lives in New York City.