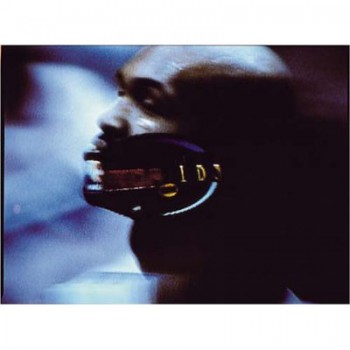 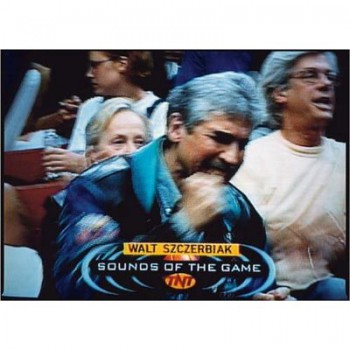 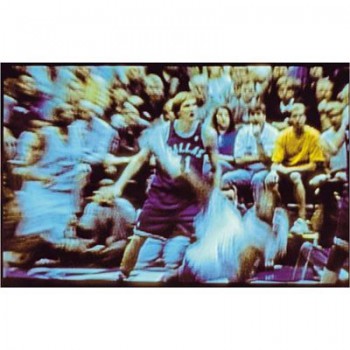 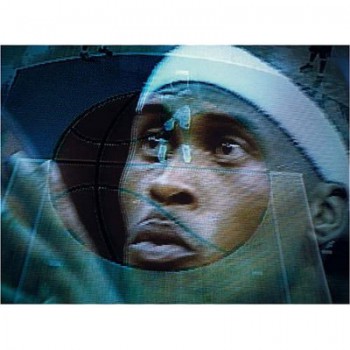 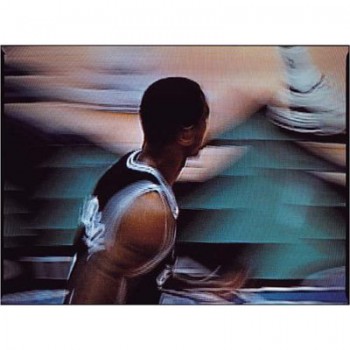 “Payson’s photographs of the NBA playoffs, I soon realized, are deeply woven into this paranoid, paranormal, paramedia web. From April through June 2001, Payson watched every game in the playoffs, camera glued to his eye, through the final triumph of the Lakers over the Sixers. He shot about two hundred rolls of color film, which amounts to over 3,200 frames. A selection of about ninety is reproduced here. Mostly photographed off an eighty-inch projection-screen TV, they are indelible impressions of the ghost in the machine of American image culture.”

A riveting journey deep into the dark heart of the American Dream, Eric Payson’s gladiators are photographs of the 2001 NBA playoffs shot off a wide-screen television. These pictures are about more than mere basketball—they explore our obsession with entertainment and voyeurism, expose our lust for the controlled violence and stylized pageantry of spectator sports, investigate the innate themes of racial politics and male bonding, and examine the electronic medium that transmits it all. Payson, a child of the American media, turned his living room TV screen into a virtual box seat at the Roman Colosseum to create Gladiators, a compelling examination of our fixation with professional sports.

Eric Payson is a photographer and performance artist. Solo exhibitions of his photographs have been mounted at Galerie Bodo Niemann, Berlin and Rene Fotouhi, East Hampton, New York. Payson’s first book with powerHouse, Bobcats (2002), is a touching portrait of the Bobcats, an all-girls softball team in Tucson, Arizona. He lives in New York and Tucson, Arizona.

Mia Fineman is Research Associate in the Department of Photographs at The Metropolitan Museum of Art, New York where she has worked on numerous exhibitions and contributed essays to Other Pictures: Photographs from the Collection of Thomas Walther (Twin Palms, 2000), Walker Evans (Princeton University Press, 2000) When Elephants Paint: The Quest of Two Russian Artists to Save the Elephants of Thailand (HarperCollins, 2000) and, with Maria Morris Hambourg, Richard Avedon: Portraits (Abrams, 2002). Her articles on contemporary art and photography appear regularly in The New York Times, Slate, and V. Fineman lives in New York City.

Mark Holborn is an editor and author working between London and New York. He has produced books with many artists and photographers including William Eggleston, Lee Friedlander, Nan Goldin, Irving Penn, Lucian Freud, and Robert Mapplethorpe. Holborn is the author of several books on Japan and Japanese art, including Beyond Japan (Jonathan Cape, 1991) and Black Sun: The Eyes of Four (Aperture, 1986). He has also written for and edited numerous books, such as The Babies by Polly Borland (powerHouse Books, 2001) and Bobcats by Eric Payson (powerHouse Books, 2001).