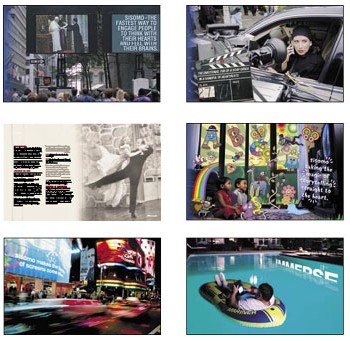 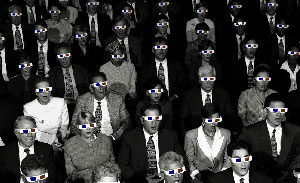 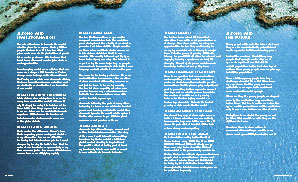 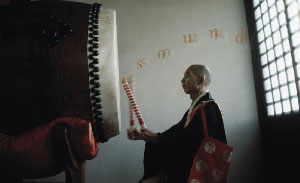 A new word has been introduced into the global language bank, and this stylish book is its debut. A richly nuanced
collection of text and imagery, sisomo: the future on screen
is a book to conquer hearts and set minds spinning with questions. For business, reaching consumers has become
a challenge on the scale of climbing Mount Everest. The mass market is splitting like an Arctic ice shelf, the media
is fragmenting—and brands have taken a big hit.

This environment presents an unavoidable conundrum for marketers and advertisers as they struggle to find new ways to work. Television, once the shining knight of emotional messaging, is suffering deeply as networks scramble to retain audiences. A radical shift is also occurring in the
relationship between consumers and the media. Where
consumers were once passive in the face of the mass market, they are now savvy individuals wired into the greatest information network the world has ever known. Like it or not, says Kevin Roberts, author of the hugely successful Lovemarks: the future beyond brands, “Creating emotional relationships with the Consumer is the business challenge of the century.”

Enter sisomo—sight, sound, and motion, the combination that made television the most powerful selling tool ever invented. As Kevin Roberts has always said, “There are three keys to the Consumer’s heart—Mystery, Sensuality, and
Intimacy. Well, here are three more.” Global ideas company Saatchi & Saatchi, experts in the heady combination of the senses, have put sisomo to work on television for decades. Now they are unleashing it in the new world of the Screen Age: on computers, mobile phones, PDAs, in-store displays, and sports stadiums; on screens on the sides of buildings, screens that glow in the corner of our eye. This book is both entertaining and challenging, brief and profound. It is for everyone who ever thrilled over a car chase or wept over a motherless deer. Its conclusion? Content that engages with sight, sound, and motion is the only way to cut through media fragmentation and connect with today’s savvy consumers.

Kevin Roberts is CEO Worldwide of ideas company Saatchi & Saatchi, one of the world’s largest and most successful creative organizations, handling more than fifty of the world’s most valuable global brands. Heading a team of more than seven thousand people in eighty-two countries, Roberts led Saatchi & Saatchi to become both Advertising Age and Adweek magazines’ Global Agency Network of the Year in 2003. He is the author of the best-selling book Lovemarks: the future beyond brands (powerHouse Books, 2004), which has now been translated into fourteen languages.
Born in Lancashire, England, Roberts’ first job as a brand manager with British sixties fashion icon Mary Quant led to the development of a philosophy that challenged business’ reliance on metrics and rational arguments.
His early career featured senior positions in Europe and the Middle East with three leading, global brand marketers—Gillette, Procter & Gamble, and Pepsi. Roberts’ intense belief in the power of inspiration and his love of working directly in the market—as opposed to being in the office—are still trademarks of his style today.

In 1987, Roberts was appointed President and CEO of Pepsi in Canada. It was there that he famously machine-gunned a Coca-Cola vending machine in order to remind his people of the passion they need to be Number One in a competitive market. (His team had just displaced Coke.) In 1997, he made the shift from client-side to heading up the global agency in New York, beginning its transformation as a hothouse for world-changing creative ideas.
Roberts is Professor of Sustainable Enterprise at the University of Waikato in New Zealand and at the University of Limerick in Ireland. He is the inaugural CEO in residence at the Judge Institute of Management, Cambridge University’s business school.