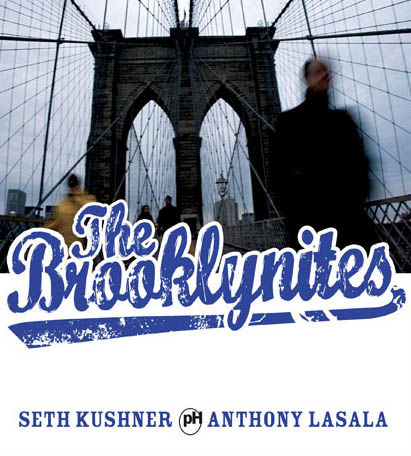 “Brooklyn is the conscience of New York. While Manhattan tears everything down and changes everything, Brooklyn does a similar thing, but fails miserably at it. It is a crazy quilt of a place. A mongrel place of sorts. It mixes old and modern in a haphazard way. It represents a tiny microcosm of the world—functional utopia.”

A complex and quixotic urban animal found ranging across southeast New York City, the Brooklynite has obtained a sort of mythological status, representing the “you tawkin’ to me?” attitude for which the city is world-renowned. For over three years, writer Anthony LaSala and photographer Seth Kushner trekked tirelessly across the borough, documenting these charismatic characters in The Brooklynites, a collection of images, interviews, and essays.

With a population of 2.5 million people, Brooklyn is one of the most celebrated locales in all the world. Its landmarks (The Brooklyn Bridge, Greenwood Cemetery), renowned neighborhoods (Coney Island, Park Slope), history (The Brooklyn Dodgers) and institutions (Brooklyn Academy of Music, Prospect Park) are recognized in every corner of the globe while its stories and legends have been recounted in hundreds of famous novels (A Tree Grows in Brooklyn, Motherless Brooklyn, Last Exit to Brooklyn), television shows (The Cosby Show), theater productions (BKLYN the musical) and films (Saturday Night Fever, Crooklyn). The Brooklynites gives readers an all-inclusive tour of the “home to everyone from everywhere”: Brooklyn, New York.

Seth Kushner is a freelance photographer and works for a large variety of clients including The New York Times Magazine, Time, Newsweek, Vibe, YRB, and Business 2.0. Kushner was chosen by Photo District News as one of their “30 Under 30” in 1999 and was a winner in their Photo Annual Competition in 2002 and 2006. Kushner’s work is syndicated by Retna LTD. He lives and works in Brooklyn.

Anthony LaSala is a senior editor at Photo District News and has freelanced for a host of other publications, including Time Out New York, Billboard, Yankee Magazine, Sights, and TV Guide. LaSala also edited the book The World’s Top Photographers: Nudes (Rotovision, 2007). LaSala was nominated as photo editor of the year by the International Photography Awards in 2003 and 2004. He is curator at the Alice Austen House in Staten Island, NY, and lives and works in Brooklyn.

Brooklyn native Terence Winter is a writer and executive producer of The Sopranos and has won a Writers Guild Award, the Edgar Award, and two Emmy Awards. Before The Sopranos, Winter wrote and produced an eclectic group of shows including Xena: Warrior Princess and Soldier of Fortune. His first feature film was Get Rich or Die Tryin’ and Brooklyn Rules was recently released in early 2007.

“It’s funny, everyone outside of Brooklyn thinks you are either part of the mob or a tough guy. I was down in Virginia on vacation recently and someone asked me to say something in Brooklynese. So I said, ‘Give me your wallet.’”
—Dick Velde