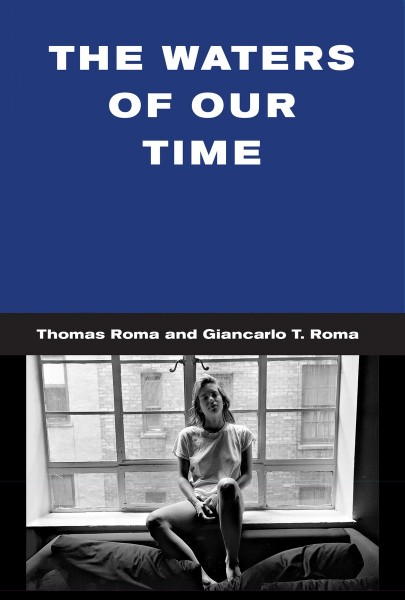 The second collaboration between father and son Thomas Roma and Giancarlo T. Roma, The Waters of Our Time is a book that could only be done in the latter part of this renowned photographer’s career and with the unique contemplation of his watchful son. A retrospective of sorts, the book contains 142 of Roma’s photographs spanning most of his career, beginning on the cover with a picture taken from his first roll of film shot in 1972, and a fictional text by Giancarlo T. Roma, written as a first-person narrative recollection in the voice of an older woman who has spent her life in Brooklyn. The written story begins on the book’s cover and is interwoven with the photographs, lending a reflective quality to the interplay between them.

In this way, the project is a true collaboration, resembling the making of a movie in reverse, where the pictures function as the script and the text acts as the moving images, coming in response. The title comes from the song “Follow” (written by Jerry Merrick and famously sung by Richie Havens, also a Brooklyn native), whose lyrics are reproduced throughout the book, and serves as kind of a sound track to the story, adding to the cinematic quality.

The Waters of Our Time was conceived as an homage to Roy DeCarava and Langston Hughes’ book The Sweet Flypaper of Life published in 1955, a cherished part of the elder Roma’s library. The book remains true to Flypaper in terms of design (size, layout, font), but differs greatly in process. Whereas Hughes selected and sequenced DeCarava’s photographs before writing the text for Flypaper, Roma selected and sequenced his own photographs first, leaving Giancarlo to write the text in the white space between pictures for The Waters.

Thomas Roma is a two-time recipient of Guggenheim Fellowships (1982 and 1991) and a New York State Council for the Arts Fellowship (1973). Roma’s work has appeared in one-person and group exhibitions internationally, including one-person shows with accompanying books at The Museum of Modern Art, NY and the International Center of Photography. He has published twelve monographs including: Enduring Justice (powerHouse Books, 2001) with an introduction by Norman Mailer, On Three Pillars (powerHouse Books, 2008) with text by Phillip Lopate, and his 2010 powerHouse Books publication Dear Knights and Dark Horses with an introduction by Alec Wilkinson. He has taught photography since 1983 at Yale, Fordham, Cooper Union, and The School of Visual Arts and in 1996 became the Director of the Photography Program at Columbia University School of the Arts where he is a Professor of Art. Roma lives in Brooklyn with his wife Anna.

Giancarlo Roma is a 2013 graduate of Columbia College, Columbia University in the City of New York with a degree in English and African American Studies. He is a freelance writer and coauthor of Show & Tell (powerHouse Books, 2002) as well as an avid chess and guitar player.