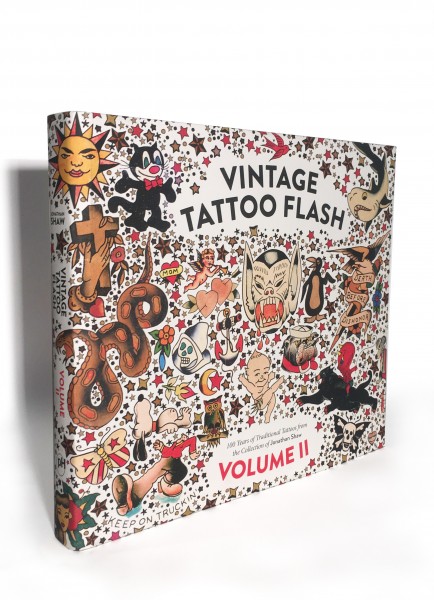 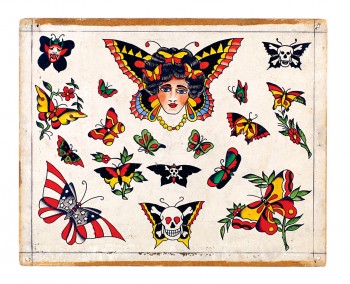 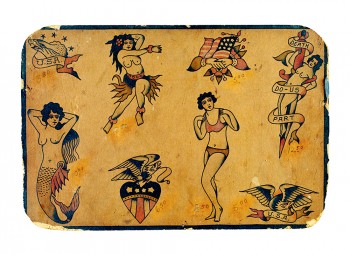 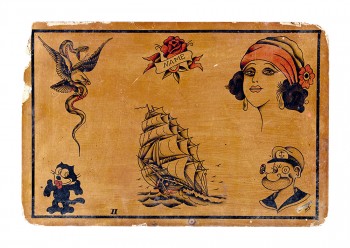 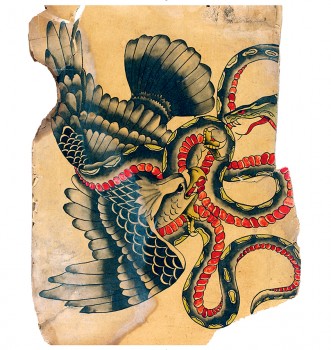 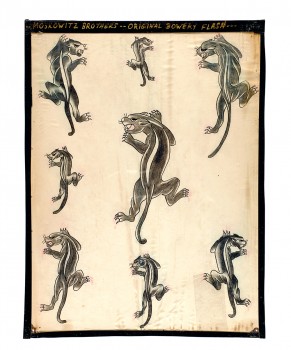 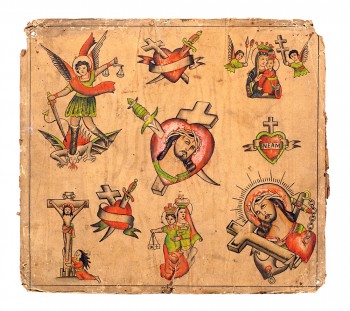 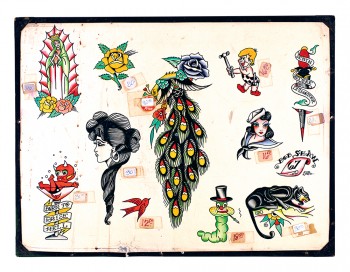 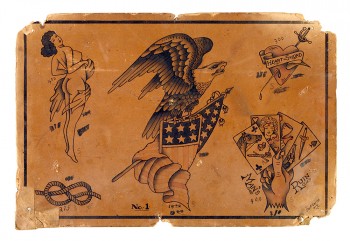 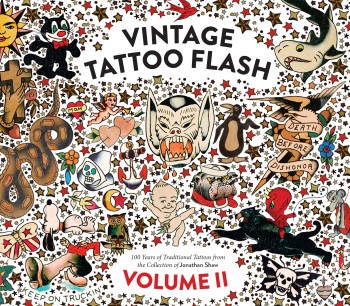 In Vintage Tattoo Flash: Volume 2, Jonathan Shaw unearths more gems from his extensive and world-renowned collection of traditional American tattoo art. Comprised entirely of previously unseen and unpublished work, Volume 2 picks up where the first volume left off–contributing a new and important body of work to the historical record of this outsider art form.

Electric tattooing as we know it today was invented in New York City at the turn of the 19th century. In the first days of American tattooing, tattoos were primarily worn by sailors and soldiers, outlaws and outsiders. The visual language of what came to be known as “traditional tattooing” was developed in those early days on the Bowery and catered to the interests of the clientele. Common imagery that soon became canon included sailing ships, women, hearts, roses, daggers, eagles, dragons, wolves, panthers, skulls, crosses, and popular cartoon characters of the era. The first tattooists also figured out that using bold outlines, complimented by solid color and smooth shading, was the proper technique for creating art on a body that would stand the test of time. In the over 100 years since then, techniques and styles have evolved, and the customer base has expanded, but the core subject matter and philosophy developed at the dawn of electric tattooing has persisted as perennial favorites through the modern era.

While most tattoos are inherently ephemeral, transported on skin until the death of the collector, a visual record exists in the form of tattoo flash: the hand-painted sheets of designs posted in tattoo shops for customers to select from. Vintage Tattoo Flash: Volume 2 represents a selection of over 200 pieces of flash from one of the largest private collections in existence and spans the first roughly 75 years of American tattooing from the 1900s Bowery, to 50s Texas, through the Pike in the 60s and the development of the first black and grey, single-needle tattooing in LA in the 70s. The book lovingly reproduces entirely unpublished sheets of original flash from the likes of Bob Shaw, Zeke Owen, Tex Rowe, Ted Inman, Ace Harlyn, Ed Smith, Paul Rogers, the Moskowitz brothers, and many, many others relatively known and unknown.

Jonathan Shaw is a world traveling outlaw artist, novelist, blogger, head doctor, anti-folk hero, whorehouse philosopher, legendary tattoo master, and notorious innovator and creator of underground art. Shaw was born in NY to big band legend Artie Shaw and movie star Doris Dowling, and was raised in LA where he learned to tattoo on the legendary Pike boardwalk from old-school California masters. After running with the likes of Jim Morrison, the Manson Family, and Charles Bukowski, he fell prey to heroin addiction and a life of crime. He finally left 1970s Hollywood to travel the world and founded Fun City, the first street tattoo shop in NYC since tattooing was decriminalized in the 1960s. He is the author of Narcisa: Our Lady of Ashes (2008) and Vintage Tattoo Flash (2016).