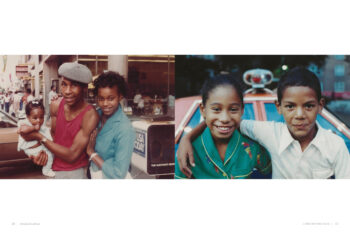 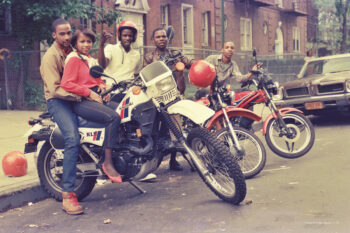 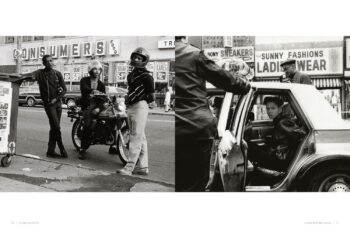 Best known as hip-hop’s finest fashion photographer for his blockbuster best-selling monograph, Back in the Days (powerHouse Books, 2001), Shabazz revisited his archive and unearthed an extraordinary collection of never-before-published documentary photographs collected for his third powerHouse Books release A Time Before Crack. A visual diary of the streets of New York City from the mid-70s to the mid-80s, Shabazz’s distinctive photographs reveal the families, the poses, and the players who made this age extraordinary.

“Deeply unpretentious and undistracted by trendy new aesthetics or technologies, Mr. Shabazz is the best kind of photojournalist: one driven simply by curiosity about other human beings.”—Ken Johnson, The New York Times

“I got nothing but love for Jamel Shabazz. I did a radio show for 12 years on 88.9 FM and introduced the world to an unsigned NAS, Biggie Smalls, Wu-Tang, Big Pun; and to me, Jamel Shabazz is right up there with any of those artists, artistically and creatively.”—Bobbito Garcia

Jamel Shabazz is best known for his iconic photographs of New York City during the 1980s. He has authored ten monographs and contributed to over three dozen other photography related books. His photographs have been exhibited worldwide and his work is housed within the permanent collections of the Whitney Museum, the Studio Museum in Harlem, the Smithsonian’s National Museum of African American History and Culture, the Fashion Instutite of Technology, the Gordon Parks Foundation and the Getty Museum. Over the years, Shabazz has instructed young students at the Studio Museum in Harlem’s “Expanding the Walls” project, the Schomburg Center for Research in Black Culture’s “Teen Curators” program, and the Rush Philanthropic Arts Foundation. He is also the 2018 recipient of the Gordon Parks award for his commitment to documentary photography. Shabazz is a member of the photo collective Kamoinge. As an artist his goal is to contribute to the preservation of world history and culture.

Liza Jessie Peterson is an author, playwright, poet, actress, and youth advocate. Her critically-acclaimed one-woman show The Peculiar Parrot was nominated for a Drama Desk Award in 2019. She is the author of the memoir All Day: A Year of Love and Survival Teaching Incarcerated Kids at Rikers Island (2017), which is currently being adapted for episodic streaming. She has appeared on screen in Ava Duvernay’s 13th and on HBO’s Def Poetry, as well as countless other productions. Originally from Philadelphia, Peterson relocated to New York City, where she rose to prominence as a slam poet at the famed Nuyorican Poets Café.

Jamal Irief, otherwise known as Masta Killa, is a celebrated American rapper who began his career as a member of the Wu-Tang Clan. Since then, he has gone on to release four solo albums, including his critically-acclaimed debut, No Said Date (2004), and, most recently, Loyalty Is Royalty (2017). Throughout his career Masta Killa has continued to work with his Wu-Tang Clan collaborators including RZA, GZA and Ghostface Killah, as well as other acclaimed rappers and producers like Pete Rock and MF Doom. He was born in Brooklyn, New York.

Koe Rodriguez is a multidisciplinary artist, hip-hop scholar, and entrepreneur. In 2019 he co-curated the exhibition “From the Feet Up: Sneakers, Hip-Hop and New York City” in Times Square, and his major installation, “Beyond the Streets,” showcased in Brooklyn. He also designed and co-curated that year a throwback sneaker exhibition for ESPN+ at Disney’s D23 expo in Anaheim, California. Rodriguez has worked on a number of international lifestyle projects with brans like Viacom, Adidas, Red Bull, Sony, Nike and Puma. As a photojournalist, he has interview and captured LL Cool J, Jay-Z, Wu-Tang Clan and the late director John Singleton, to name a few. He was born in New Jersey, where he currently lives and works.