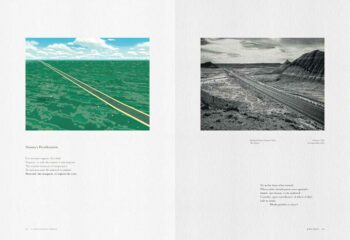 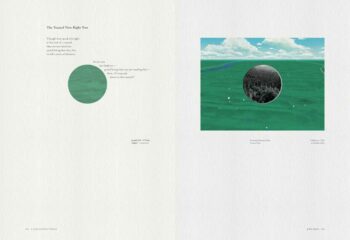 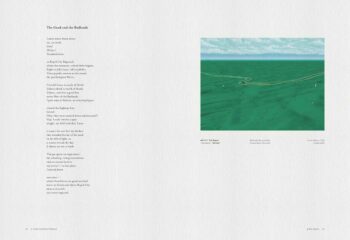 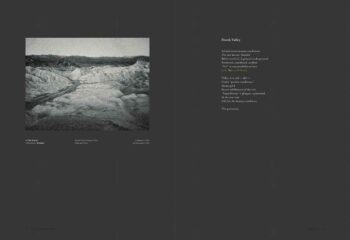 After a four-year journey–flying more than 300,000 air-miles aboard over 200 flights, driving over 15,000 miles with the aid of over 25 car rentals, including hiking over 220 miles, 7 helicopter charters, 6 seaplane charters, 8 grizzly sightings, and 1 husky sled–poet and photographer John Mack returns with evidence of some of America’s most iconic, natural sites and their current state of deterioration vis a vis the proliferation of smart devices and the encroaching virtual environment.

In an attempt to shed light on the current state of our nature, Mack completes what he calls a “reconaissance mission,” having crisscrossed the entire United States of America. Covering a land with length from Maine to Hawaii, a depth from the southern bend of Texas to the far reaches of Alaska’s arctic circle, A Land Between Worlds shares Mack’s vision of who we are in relation to our environment and looks for clues as to whether or not a balance between nature and today’s increasingly seductive technology can be attained.

Comprised of gatherings from nearly fifty iconic U.S. National Parks, Mack uses poetry, landscape photography, and an interactive augmented reality app to invite us into a deep introspection about what it means to be human: What, if anything, can our National Parks teach us about the nature within us? A Land Between Worlds is evidence of hope in a world where nature, freedom, love, democracy, and reality itself are under attack. It’s interactive juxtaposition of natural sanctuaries and their digital versions reveals the encroaching digital landscape, our attachments to it, and the uncertain fate of our nature.

Available in signed, limited collector’s editions and standard editions, A Land Between Worlds includes a “making of” video, reminding us of the art of human craft in an ever more digitized world.

A Land Between Worlds is the official book of A Species Between Worlds: Our Nature, Our Screens, the exhibition showcased in New York City in January of 2022. The month-long exhibition attracted some of the most influential voices at the forefront of the battle to defend human awareness from the threats that unchecked use of computer-based technologies pose to our humanity. Available in signed, limited collector’s editions and standard editions, the poetry book includes not only all of the exhibition’s U.S. National Park images but also the project’s entire collection of poems, many of which were not on display to the public.

Thinker and artist John Mack shares the poetry of nature as a counterpoint toward a world that is every day becoming all the more dependent on digital devices and algorithmic feeds. In 2021 Mack founded Life Calling Initiative, a not-for-profit aimed at helping society to live fulfilled lives in the digital age while retaining our humanity and personal autonomy.
This is achieved through a diverse set of tools and activities, including, but not limited to, awareness campaigns, education, art, lectures, and programming. Among the initiatives is A Species Between Worlds: Our Nature, Our Screens, an interactive photography exhibition that questions how a balance between our connection to nature and today’s
growing device-dependence might be attained.

In his early career as a photographer, Mack sought “real moments” of the human heart. His first publication, Xibalbá: Lost Dreams of the Mexican Rainforest (2005), exhibited in Mexico City, tells the story of the risk to the human imagination and to sacred culture in the wake of an environment’s exploitation and destruction. A later publication, Revealing Mexico (2010), exhibited in Rockefeller Center’s Channel Gardens, brought the soft poetry of Mexico’s land and people into the heart of New York City’s bustling streets. Mack later published Marseille: At Their Home (2018), a collection of black and white street photography in the port city of Marseille, France.

Mack has appeared on Charlie Rose, The Martha Stewart Show, and The Today Show. He received third prize in the category of photography at the 25th Annual New York Book Show for Revealing Mexico. Mack’s photography is represented by the Robert Mann Gallery in New York City.

Dr. Richard Garriott de Cayeux is an icon in the computer gaming field, having created games for more than 40 years. He is the father of “Massively Multiplayer Online Games” and also credited with the creation of the gaming terms “Avatar” and “Shard” (for divisions of servers). He and his games, of which the best known is the Ultima Series, have been inducted into the computer gaming hall of fame. He received the industry lifetime achievement award, been inducted into two industry hall of fames and has been named a “Living Game God.” He has built three leading gaming companies: Origin Systems/Electronic Arts, Destination Games/NCsoft and most recently Portalarium, which publishes his most recent work “Shroud of the Avatar”.

Richard is also a principle shaper of commercial human spaceflight. He co-founded Zero G Corp, The X Prize Foundation and Space Adventures which remains the first company to arrange space flights for private citizens. He is the sixth private astronaut to have lived aboard the International Space Station. As the son of a NASA astronaut, he became the first second-generation astronaut. He remains a key leader in civilian and commercial space. Richard also served on the NASA Advisory Council. From his space activities, he has been inducted into the Environmental Hall of Fame and the Ham Radio Hall of Fame. He also received the 2009 National Space Society’s Space Explorer Pioneer Award, the Aerospace Medical Association’s 2009 SNFS Lovelace Award, and the 2009 Arthur C Clarke Award for Individual Achievement.

As an explorer, Richard has traveled around the globe, including through the jungles of Africa, the Amazon, the North and South Poles, the deep seas (Titanic, hydrothermal vents and deep wrecks), as well as orbiting the earth aboard the International Space Station. Through all these explorations, Richard has worked to advance scientific understanding and environmental responsibility.

Although he dropped out of the University of Texas to start his first gaming company, he has since received an honorary doctorate degree from Queen Mary University. Richard’s non-profit and philanthropic works include serving on the boards of The Explorers Club, The X Prize Foundation and The Challenger Center for Science Education. Richard is married to Laetitia Garriott de Cayeux and they have two children—a daughter Kinga and son Ronin.