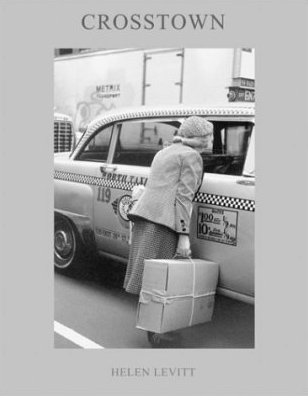 Since the mid-1930s, Helen Levitt has photographed life on the streets of New York, capturing the pulse of the city at moments when sidewalk life becomes an urban portrait. Crosstown is the most comprehensive monograph devoted to this master photographer. In pioneering pictures of 1930s and 1940s Harlem, an innovative color series completed in 1960, and black-and-white images from the 1980s and 1990s, the book reveals the changes in New York street culture as well as the evolution of Levitt’s photographic eye.

From Francine Prose’s introduction to Crosstown: Photographs by Helen Levitt:

Look at a Helen Levitt photo, and the city streets, subways, and rooftops become pure Helen Levitt. Encountering Levitt’s pictures, taken mostly between 1936 and the present, mostly around Manhattan, is like taking off your sunglasses, or cleaning your spectacles, or just blinking, which is only appropriate, since so many of them seem to have been taken in a blink, and to picture something that will be gone, that was gone, a blink after it was taken. These photographs radically readjust our visual fine-tuning to remind us of how rapidly everything changes, of how large a fraction of what we see won’t exist in its present form only a heartbeat from now. It’s impossible not to notice that the beautiful gypsy kid, caught in mid-motion in the doorway of his apartment, was disappearing even as his portrait was being taken….

The photographs in Crosstown make the difficult look easy. They seem so effortlessly right that it’s only when you think for two seconds, or recall all the bad documentary photography that you’ve seen, or pause to marvel at the high wire act they’re performing even as they focus steadfastly on the ground, that you realize how frighteningly simple it would be to get all of this terribly wrong, to make the children cute and the old ladies darling. Helen Levitt’s work is never sentimental, it never estheticizes or objectifies, never turns its subjects into art objects, never distorts them into noble heroes of poverty and desolation; it is never falsely, preemptively elegiac or nostalgic. You never feel the artist calling attention to herself or to the breadth and compassion of her vision. Everything is happening too quickly — and too interestingly — for anything remotely resembling self-conscious artiness, or narcissism.