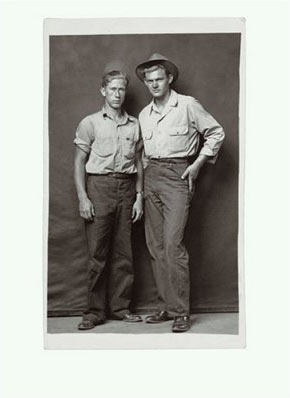 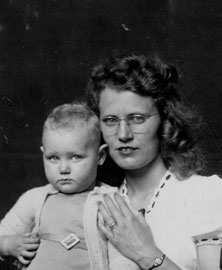 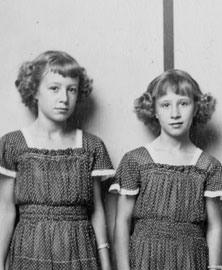 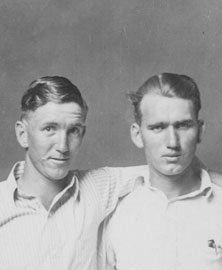 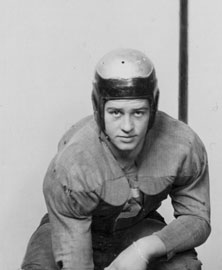 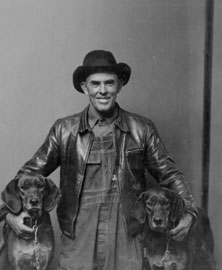 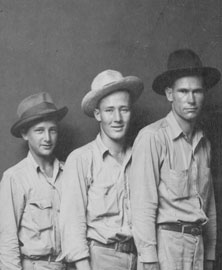 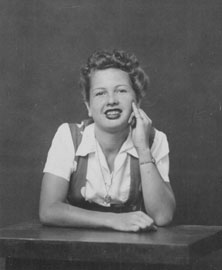 Mike Disfarmer is a true American eccentric. Born Mike Meyer, he changed his name to distance himself from both the surrounding farming community of his native Arkansas and from his own kinfolk—claiming that a tornado had accidentally blown him onto the Meyer family farm as a baby. The son of a German-born Union soldier in the heart of the South, Disfarmer was an agnostic from Lutheran stock among the church-going Baptists and Methodists, and remained a confirmed bachelor in a community of large families.

Despite his outsider status, as the resident studio photographer in the tiny town of Heber Springs from 1917–1956, Disfarmer was the ultimate insider, privy to each family’s rites of passage—from first birthdays to high-school graduations, from engagements to anniversaries, from army furloughs to funerals. His studio portraits present the people of the heartland during the turbulent times of the early twentieth century. Disfarmer documented the farm families as they sent their sons to fight World War I, struggled through the Great Depression and returned to battle for World War II. His career concludes with the optimistic 1950s, as his previously somber camera joyfully captures the pairings of bobby-soxed young women and their James Dean–wannabe boyfriends.

Previously, Disfarmer’s work was known only from a cache of glass-plate negatives that had been salvaged from his studio after his death and spanned a fifth of his forty-year career. The culmination of an unprecedented two-year historical reclamation project in which a dedicated team of researchers scoured every family album in every home along every dirt road in Cleburne Count, Disfarmer: The Vintage Prints presents the never-before-seen original vintage prints of the enigmatic photographer throughout his career.

Mike Disfarmer owned and operated a private portrait studio for more most of his adult life. Usually using antiquated glass-plate negatives, Disfarmer captured the likeness of the residents of Heber Springs, Arkansas and the surrounding farmland during a pivotal moment in American history. He died in 1959.

Gerd Sander is a leading curator, collector and dealer specializing in European twentieth-century photographs. The grandson of the great German portraitist August Sander, he operated his own photographic business in Cologne from 1971-1975. He ran galleries in Washington, DC, and New York City from 1976-1988, and in 1989 started compiling the August Sander Archive. He is Chairman of the Board of the Photographische Sammlung / SK Stiftung Kultur, and recently co-edited the seven-volume publication August Sander: People of the 20th Century.

Richard B. Woodward has written about art and photography for more than twenty years. His essays have appeared in monographs on Lee Friedlander, William Eggleston, Robert Adams, David Levinthal, Abelardo Morell, An-My Lê and many other photographers. He has been a visiting critic at Columbia University’s Graduate School of the Arts and the Rhode Island School of Design and published in numerous magazines and newspapers, including the Atlantic Monthly, The New Criterion, the New Yorker, and regularly in The New York Times.

Michael P. Mattis has put together a comprehensive collection of fine-art photographs from the origins of the medium to the present day. Exhibitions curated from his collection include Picture Perfect: Masterworks of Photography from the Hochberg-Mattis Collection; Edward Weston: Life Work; For my best beloved sister Mia: An Album of Photographs by Julia Margaret Cameron; and In a New Light: 19th Century Photographs from the Hochberg-Mattis Collection. He has lectured on photography at the Metropolitan Museum of Art, the George Eastman House, the Amon Carter Museum, the San Diego Museum of Photographic Arts, and the Harvard Club of New York among other places.