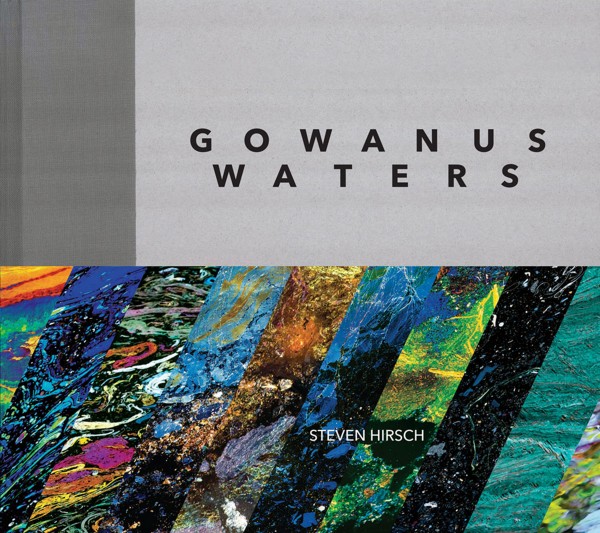 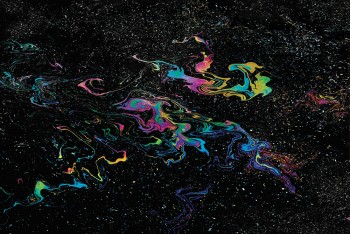 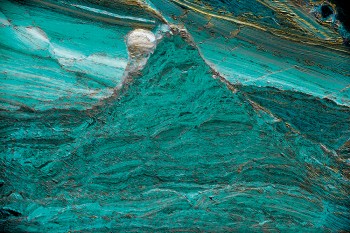 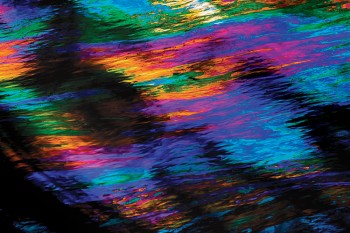 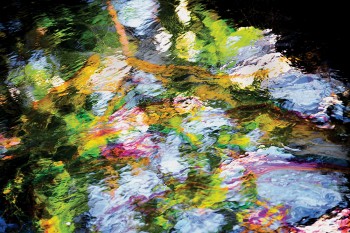 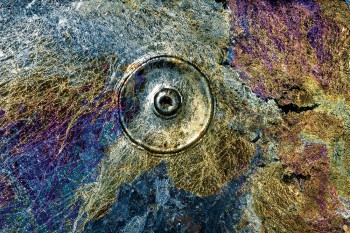 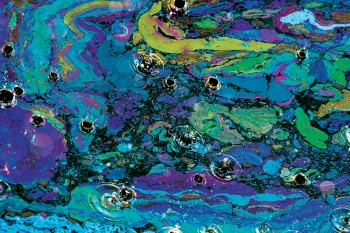 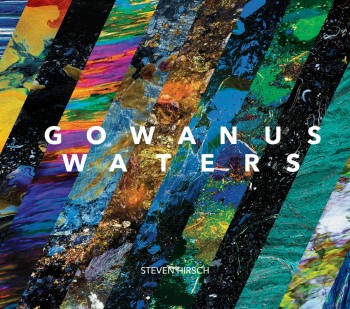 The Gowanus Canal is a 1.8-mile-long waterway connecting Upper New York Bay (the bay in between Brooklyn, Manhattan, New Jersey, and Staten Island) with the formerly industrial interior of Brooklyn. Originally it was fed by the marshland and freshwater springs in Brooklyn and drained into the Atlantic Ocean in Upper New York Bay.

Because of the way it was created, though, it has become stagnant and polluted by decades of runoff and dumping from local neighborhoods and businesses. In the summer, you can smell it from blocks away. It’s not a good smell, but that doesn’t deter photographer Steven Hirsch, who finds all kinds of beauty in what floats upon the surface.

Steven Hirsch grew up in Brooklyn in the late 1940s and 50s when Brooklyn was filled with a new middle class. Brooklyn was a paradise and he knew practically the whole borough, except for the Gowanus Canal. It was not until 2010 when a friend took him Hirsch there for the first time that he witnessed the famously polluted and now EPA Superfund waterway.

When one thinks of canals they usually picture tree-lined waterways bustling with commercial activity. Not so with the present-day Gowanus. Built in the middle-to-late 19th century, the canal was to benefit the ever-expanding industrial revolution that arose in Brooklyn and to drain the surrounding marshes for land reclamation. Its creation accomplished those goals, but once it was no longer helpful it was left to decay, and decay it did. Today, the Gowanus Canal is lined by fuel oil depots and bus and scrap metal yards and is recognized as one of the most polluted bodies of water in the United States. In 2010 it was declared a Superfund site.

The day Hirsch first visited the acrid and vile smell made him nauseous. While standing on the bank he noticed a large eruption of oil start pulsating on the surface. He photographed it for about 15 minutes and it disappeared as quickly as it started. So was born a fascination with the way two centuries-worth of chemicals and detritus mixed with the water. Hirsch has shot the canal surface dozens of times since that unforgettable day and the result is a series of eerily beautiful abstract photos, telling the visual story of what pollution and indifference hath wrought. The combination of the inky blacks and varied specks and sheens all appear to be galaxy-like, but the viewer must not forget that they are looking at heavily polluted water here on Earth and nestled in one of the nations most populous and affluent cities. Today, efforts are being made to clean up the canal and will need to continue to for years to come, and it is important documentation like Hirsch’s work which should help spur action.

Born in Williamsburg, Brooklyn, Steven Hirsch now lives in New York’s East Village. Hirsch’s work has appeared in numerous publications including The New York Times, The Wall Street Journal, The Paris Review, The New York Review of Books, Paris Match, Time, Wired, Vice, Print, The Huffington Post, The Atlantic and Stern. He has taught at the International Center of Photography, The New School, Parsons School of Design, The School of Visual Arts, New York University and Pratt Institute. Hirsch has been awarded two New York Foundation for the Arts grants and his work has been widely exhibited and collected by The Museum of Modern Art, The Polaroid Collection, The Everson Museum of Art, Bibliothèque Nationale de France, Israel Museum, The Howard Stein Collection, The Library of Congress and the New Orleans Contemporary Arts Center, among others.