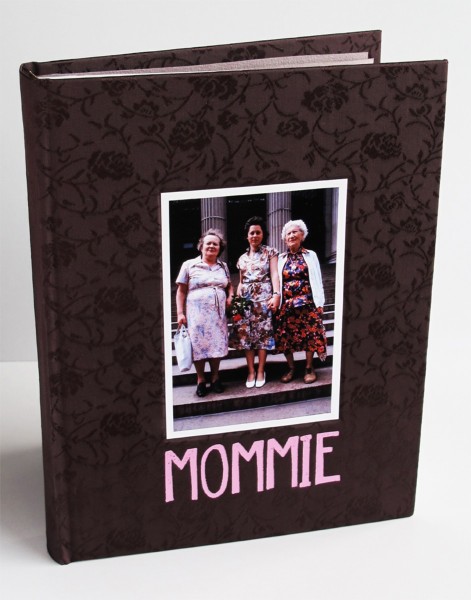 Mommie is a remarkable photographic portrait of three generations of women in the family of photographer Arlene Gottfried and an intimate story of the inevitable passage of time and aging. Pictured within, we are introduced to Gottfried’s 100 year old immigrant grandmother, fragile mother, and reluctant sister over the breathtaking course of 35 years.

An artist turning their eye on their own immediate family is a well explored theme, but Gottfried has achieved the sublime with a multi-decade long commitment to document the intimate lives of her nearest kin. Gottfried succeeds in creating a complete twentieth century portrait of four lives inextricably interwoven through relation, sickness, need, love, and the absence of the only male in the family who passed away while Arlene was still young.

Living as many mid-century Jewish New York families did, the Gottfrieds were not wealthy and lacked any trappings of luxury. Close examination of their world on Avenue A in Manhattan’s Lower East Side reveals a dimly lit small apartment, cartons of budget saltines and groceries, chipped paint, damaged floor tiles, guarded loose change, and well worn clothes – details natural to the lives of many families of immigrants in New York.

Mommie is testament to the passage of time, changes in the generations, losing loved ones and a familial experience at once both similar and unique to all.

Arlene Gottfried, born in Brooklyn, graduated from the Fashion Institute of Technology in New York, and worked as a photographer at an ad agency before freelancing for top publications, including The New York Times Magazine, Fortune, Life, and The Independent in London. Gottfried has exhibited at the Leica Gallery in New York and in Tokyo, and at the Smithsonian Institution in Washington, D.C., among others. Her photographs can be found in the collections of the Brooklyn Museum of Art, The New York Public Library, and the Maison Européenne de la Photographie in Paris. She is the recipient of numerous awards, including the Berenice Abbott International Competition of Women’s Documentary Photography. Gottfried is the author of Bacalaitos & Fireworks (powerHouse Books, 2011), Sometimes Overwhelming (powerHouse Books, 2008), Midnight (powerHouse Books, 2003) and The Eternal Light (Dewi Lewis Publishing, 1999). A lecturer and a teacher, Gottfried lives and works in New York City.

A third-generation New Yorker, Sara Rosen is a publisher, editor, writer, curator, publicist, and brand strategist. Under her imprint, Miss Rosen Editions, she has published fifteen books with authors including Boogie, Martha Cooper, Danielle Levitt, Ricky Powell, and Charlie Ahearn, among others. Her career highlights include the Vandal Squad panel discussion at the powerHouse Arena, Brooklyn (2009); “We B*Girlz: A 25th Anniversary Breakin’ Event at Lincoln Center Out of Doors” (2006); the graffiti episode of NBC’s “The Apprentice” (2005); and the Hilhaven Lodge party at Robert Evans’ Beverly Hills estate (2003).