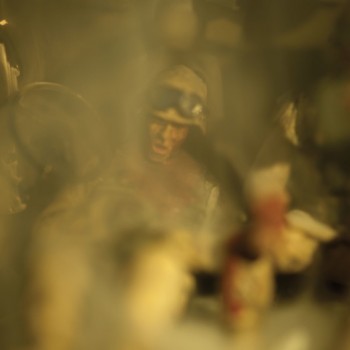 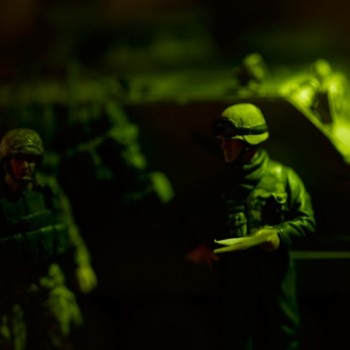 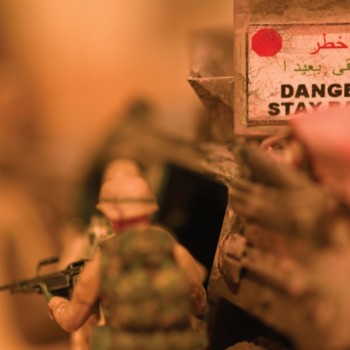 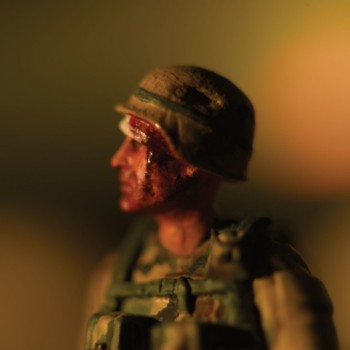 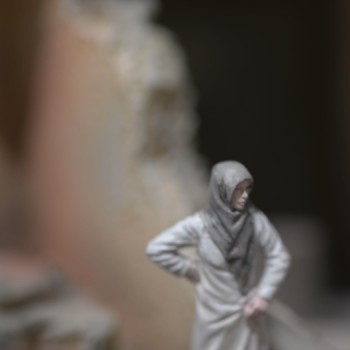 “Levinthal’s technique blurs the distinctions between toys and what they represent, and by extension, between fantasy and reality.”
—Grady T. Turner

“So clever, so thematically complicated are David Levinthal’s artistic photographs one could mistake them for intellectual riddles.”
—Roger Rosenblatt

Dealing with war in any context is always a difficult and often problematic venture. In I.E.D., acclaimed photographer David Levinthal uses toy soldiers and plastic Humvees to attempt to explore and understand the ongoing conflict in Iraq.

Why simulate a war with toys when it is already so familiar to us through daily news broadcasts, and so well documented by photojournalists and soldier-generated cell-phone imagery? In part is it because this book is not just a recreation of the war in Iraq; it is also a commentary about our society and how it is imaging and imagining a war through the use of such direct and immediate signifiers. Never before has there been an instance of such a massive production of toys directly related to a current and unresolved conflict.

Levinthal has always viewed toys as both an abstraction and as a tool by which a society and a culture socializes itself. The choice of which and what kind of toys are created, how they are posed, and what they are attempting to represent reflects assumptions about a society’s views. I.E.D. is an attempt to look at these questions using the canvas of the war in Iraq, and the new and frightening aspects of this conflict. The acronym I.E.D. (improvised explosive device), unknown to most until just a few years ago, is now a part of our daily vocabulary. By abstracting what is already distant and foreign, Levinthal brings a new perspective to the discourse about this war, going beyond reality to create a new and perhaps more immediate presence.

David Levinthal, born in San Francisco in 1949, has been working with toy figures and tableaux as the subject matter for his artwork since 1972. He is the photographer and coauthor, with Garry Trudeau, of Hitler Moves East, originally published in 1977. In January of 1997, the International Center of Photography presented a survey of Levinthal’s work from 1975 through 1996. He has received a National Endowment for the Arts Fellowship and was named a 1995 Guggenheim Fellow, among other accolades His work is included in numerous museum collections, including the Whitney Museum of American Art, the Museum of Modern Art, The Metropolitan Museum of Art, the Gene Autry Western Heritage Museum, and The Menil Collection.

David Stanford edits the military blog The Sandbox with Garry Trudeau on Doonesbury.com, publishing dispatches from soldiers in Iraq and Afghanistan, returning troops, and home-front spouses and parents.

Author’s Introduction to the Book

This book is an examination of how we are looking at war. It is about how and perhaps why the wars that we are now engaged in have been miniaturized and abstracted right before our eyes.

We are faced for the first time with war that is brought to us virtually in real time, through cell phone images and streaming video, daily television sound bites and a profusion of milblogs. And it is being brought to us through toys and models as well.

In the fall of 2006, I came across a company that was making sets of model soldiers and civilians from the wars in Iraq and Afghanistan. They were made of metal and beautifully hand-painted.

I had seen one of the first sets of these figures back in 2004—a group of figures depicting Osama bin Laden being captured by U.S. Special Forces. The vacuum-formed cave that served as a background was available as an accessory. Two years later, there was suddenly a flood of figures and models, miniaturizing the participants and objects involved in both conflicts; everything from Iraqis manning checkpoints to insurgents, who came in a box labeled “The Bad Ones.” Along with the increase in the number and type of models came an increase in the quality of the figures and armored vehicles. Kits were now available that offered highly detailed molded plastic parts that could be painted and used to construct extremely realistic dioramas.

Thirty-six years ago, while I was a graduate student in photography at Yale, I started working with some very small and very simple unpainted plastic toy soldiers. Creating primitive dioramas with butcher paper and paint, I began a series of photographs that eventually evolved into a collaboration with fellow student Garry Trudeau and resulted in a book entitled Hitler Moves East. First published in 1977, it re-created the conflict of the Eastern Front in WWII.

In the early 70s there were very few documentary photographs or films from the Eastern Front available. The British series on the subject, narrated by Burt Lancaster and broadcast on PBS in 1978, was appropriately called “The Unknown War.”

This paucity of images gave Garry and me a virtually blank visual canvas. I hadn’t lived through World War II, so I was free to let my imagination merge with the documentary images that did exist and create a symbolic reality. Working with the concept of staged photography, I was venturing into unbroken ground.

The situation I faced when I began this project in 2007 was completely different. The reality of war today is all too vivid. Not only are there now models covering every facet of the war and every imaginable vehicle, but all of these figures exist in every degree of quality, from the most simple representation to the most complex and exact replica.

Synchronicity has linked my work to a project by my Hitler Moves East collaborator, Garry Trudeau, creator of the comic strip Doonesbury. In the fall of 2006 he started The Sandbox, a milblog which posts writing from troops deployed to Iraq and Afghanistan on his website Doonesbury.com. In the course of The Sandbox’s first two years the site’s Duty Officer, David Stanford, has edited and posted over 500 essays from over 100 contributors. For I.E.D. he has drawn from that body of work to provide the boots-on-the-ground testimony that accompanies the images.

What was I trying to accomplish with these photographs? Leaving aside the analysis that psychotherapy might provide, which would be far too expensive and impossible to schedule around the demands of a very active four year old, I can only venture a self-reflective guess. I was drawn to these figures in large part because I was both amazed at their existence and fascinated by what they represent. I wanted to make beautiful, compelling pictures of the horror of war. I wanted to create reality without hiding the unreality of what I was doing.

When something unreal can become almost real, it is perhaps more frightening to us, and perhaps more revealing.
—David Levinthal