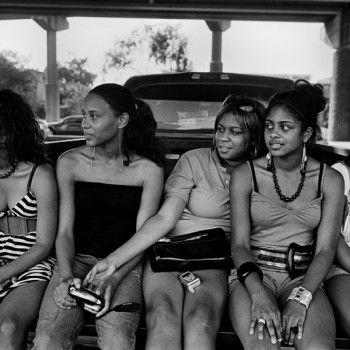 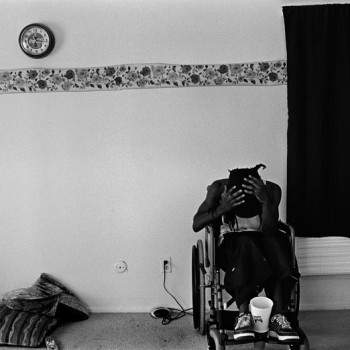 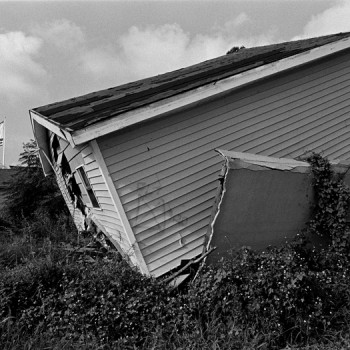 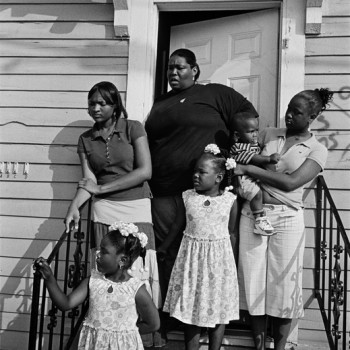 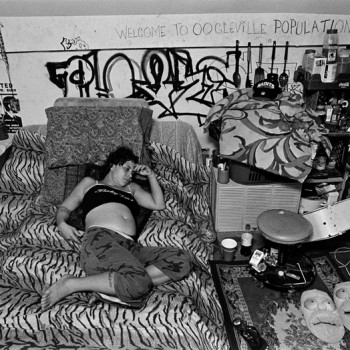 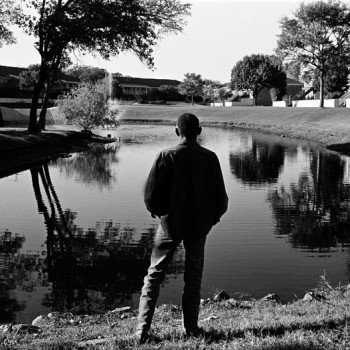 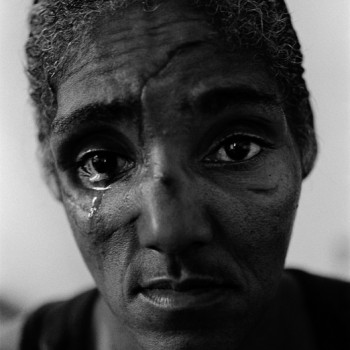 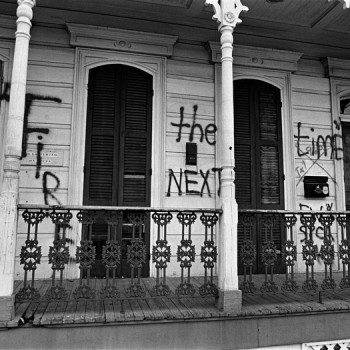 “The feeling the evacuees got from volunteers was, ‘We did what we could do for you, now you’re on your own.’ That’s the American way, that’s what we’re supposed to do. The evacuees were like, ‘We’re trying, we’re trying.’”

Hurricane Katrina was the most costly natural disaster in
the history of the United States. The Category 1 hurricane,
which landed August 29, 2005 in the Gulf Coast region,
caused 81.2 billion dollars in property damage, killed 1,836
people, and permanently displaced hundreds of thousands
more. In the weeks following the disaster the international
media criticized the failure of federal, state, and local
governments to act competently and swiftly to restore order
and assist victims, as well as the faulty infrastructure that
had allowed the storm to effect such severe destruction.
On-the-ground reporting also revealed that tens of thousands
of impoverished people—nearly all of whom were African-
American—were enduring conditions of extreme squalor,
with seeming indifference from the government. Beyond the
economic costs, vast emotional and psychological traumas
continue to plague the communities affected by the disaster.

Still Here, the fourth powerHouse Book by photographer
Joseph Rodríguez, documents the ongoing expressions of
hope, perseverance, and suffering in the still-devastated
communities of New Orleans and Texas. Rodríguez spent
two years photographing and interviewing families and
individuals who shared their daily struggles to rebuild their
lives.

Like the photographers who worked with the Farm
Security Administration during the Great Depression in the
1930s, Rodríguez’s work alerts Americans to the ongoing
pressures faced by some of the country’s most distressed
and vulnerable citizens. Nearly three years since the mass
exodus that followed Hurricane Katrina, well over 100,000
people have not returned to New Orleans. These black-and-
white portraits of the displaced, and of others who
have returned to the city despite spiraling crime rates and
desperate poverty, remind us that in spite of the loss of
home, community, and culture, so many are pushing forward,
and are “still here.”

Joseph Rodríguez was born and raised in Brooklyn, New
York. Rodríguez’s work has appeared in such publications
as The New York Times Magazine, National Geographic, GQ,
Newsweek, Esquire, ESPN magazine, and Stern. He has
received awards and grants from a number of prestigious
ar ts organizations, including Pictures of the Year by the
National Press Photographers Association in 1990, 1992,
1996, and 2002. His previous books include Flesh Life:
Sex in Mexico City, Juvenile, and East Side Stories: Gang Life
in East L.A. (powerHouse Books, 2006, 2003, and 1998),
The New Americans (New Press, 2004), Respekt: Gangs and
Their World in Los Angeles (DN Bokforlaget, 1997), and
Spanish Harlem (National Museum of American Art/DAP,
1995). Rodríguez teaches at New York University and at
the International Center of Photography. He is currently
represented by the Bill Charles agency.

Patrice Pascual is the executive director of the Journalism Center on Children & Families, a nonprofit training and resource service for journalists based at the University of Maryland’s Merrill College of Journalism. Before joining the center in 1999, she was a freelance writer and editor for print and web-based publications and worked in public television.