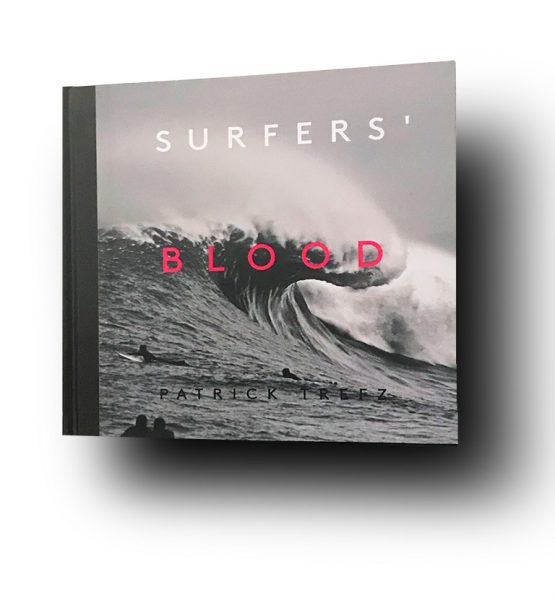 Surfers’ Blood, an update with new texts of the popular hardcover, from award-winning surf photographer and filmmaker Patrick Trefz, is a survey of decades spent photographing the lifestyles and bloodlines of surf culture across the globe. Surfers’ Blood captures all the diverse elements that make surfing so gripping and that helped it maintain its vitality in the popular consciousness for generations. A beautiful collection of oceanscapes, portraits, and action shots, Trefz captures the most intense, glamorous, and frightening aspects of surfing along with moments of beauty, stillness, and serenity. The book juxtaposes world champions and unsung local heroes, monster waves and gentle rollers.

Surfing is all about mankind’s intimate connection with the badass energy and beauty of nature. It is a deep bond, and for many surfing is a lifelong devotion and a spiritual outlet—a personal experience far removed from its much-hyped and commercialized public persona. Surfing is deeper than magazines and Hollywood depictions would lead us to believe—much deeper. For most surfers, surfing is in their blood and it connects them to an extended family that is linked through practice, tradition, craft, emulation, apprenticeship, and shared experience. Surfers’ Blood reaches out to those hardcore, dyed-in-the-wool surfers through an honest and beautiful portrayal of their sport and its surrounding culture, while at the same time offering outsiders a peek into the intense undiluted world of surf.

Patrick Trefz lives and works in Santa Cruz, California. Trefz is an award-winning art, documentary, and action photographer and filmmaker. He has been recognized for three critically acclaimed feature-length documentaries: Thread, Idiosyncrasies, and Surfers’ Blood. He has directed multiple music videos, commercials, and shorts. Trefz is known nationally and internationally for work in publications including Surfer, Big, Geo, and The New York Times, and he is the author of Santa Cruz: Visions of Surf City, and Thread.

Jamie Brisick’s books include Becoming Westerly: Surf Champion Peter Drouyn’s Transformation into Westerly Windina; We Approach Our Martinis With Such High Expectations; Have Board, Will Travel: The Definitive History of Surf, Skate, and Snow; and The Eighties at Echo Beach. His writings and photographs have appeared in The New Yorker, The Surfer’s Journal, and The New York Times. In 2008 he was awarded a Fulbright Fellowship. He lives in Los Angeles.

Iñigo Urdinaga was born in a small Basque fishing village, Orio, in 1974. He started catching waves when he was a kid, and he still surfs hard. He studied radio and television, and then graduated in Advertising and Public Relations. He has been fond of literature since he was young. Urdinaga worked for one of the largest advertising agencies in the Basque Country. Now he works freelance as a communications consultant. If he does not answer a call, customers can easily guess where he is. Urdinaga is the author of Surflaria eta Paradisua (The Surfer and Paradise), the first surfing book written in Basque language, one of the oldest languages in Europe.

Margaret Cohen hails from New York City. She teaches in the Department of Comparative Literature at Stanford University and holds the Andrew B. Hammond Chair of French Language, Literature and Civilization. She is the author of multiple books, including Profane Illumination, and The Novel and the Sea. When she is not teaching or writing, she spends her time in and around Monterey Bay.