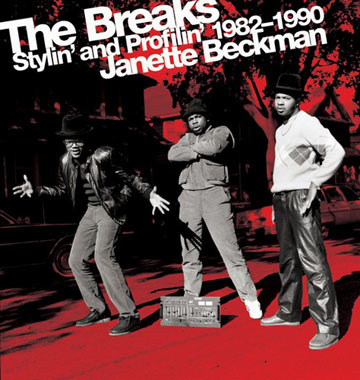 “These images, which span music, street culture, and hip hop icons from 1982 to 1990, feature entertainers at the breaking point of their careers. The pictures manifest the genius of underground scenes and highlight their influence on today’s music scene.”
—Paper

In the fall of 1982, celebrated photographer of the British music scene Janette Beckman moved to New York City, where she found Hip Hop on the edge of explosion. After a decade underground, the DJs, MCs, b-boys, fly girls, and graff writers were finally getting their due from the downtown crowd. While trains were covered in graffiti and boomboxes were blasting on the corners, DJs were up in the clubs while the dancers rocked the floor. Artists were getting signed and local legends were born. And while others called hip hop a fad, Beckman knew better.

Her photographs transport us back to a time before music videos, marketing departments, and über-stylists took control. The queen of the 80s album cover, Beckman shot the icons of the era: Afrika Bambaataa, GrandMaster Flash and the Furious Five, the Fearless Four, the World Famous Supreme Team, Lovebug Starski, Salt-n-Pepa, Run-DMC, Stetsasonic, UTFO, Roxanne Shante, Sweet T, Jazzy Joyce, Slick Rick, Boogie Down Productions, Eric B. and Rakim, EPMD, NWA, Ice-T, 2 Live Crew, Tone Loc, Gang Starr, Ultramagnetic MCs, Rob Base and DJ E-Z Rock, Special Ed, Leaders of the New School, Jungle Brothers, Beastie Boys, Rick Rubin, and countless others. The era was as original as it was innocent, and Beckman’s images remind us of a culture that brought forth The Message before it got Paid in Full.

Londoner Janette Beckman began her career at the dawn of punk rock, working for The Face and Melody Maker. Her portraits celebrating the music and attitude of bands like The Clash, The Sex Pistols, The Jam, The Specials, The Police, The Ramones, and the punk, mod, skinhead, 2-tone, and rockabilly culture in the UK are collected in Made in the UK: The Music of Attitude 1977–1983 (powerHouse Books, 2005). Beckman’s work has appeared in Esquire, Rolling Stone, and Glamour, to name a few. She lives and works in New York.

Def Jam Recordings mogul Bill Adler has worked alongside hip hop staples Kurtis Blow, Run-DMC, Dr. Jeckyll & Mr. Hyde, the Beastie Boys, LL Cool J, Public Enemy, Jazzy Jeff & the Fresh Prince, and others, and is the author of Tougher than Leather: The Rise of Run-DMC (Consafos Press, 2002) and a contributor to the pioneering Hip Hop photography book by Janette Beckman Rap: Portraits and Lyrics of a Generation of Black Rockers (St. Martin’s Press, 1991). Adler is the cofounder of NuYo Records, the founding owner of Eyejammie, a fine arts gallery devoted to hip hop, and a well-renowned archivist.

Throughout the 1980s, Tom Terrell, a.k.a. Tom T., was Washington, D.C.’s most influential club (Nightclub 9:30, Fifth Column) and radio (WHFS-FM) DJ. Since 1996, TT’s features and reviews for Vibe, Trace, Essence, Global Rhythm, and NPR’s All Things Considered have inspired music lovers at home and abroad. His pop culture essays have also been published in The Vibe History of Hip Hop (Three Rivers Press, 1999), Men of Color: Fashion, History, Fundamentals (Plexus, 1999) and Transculturalism: How the World Is Coming Together (powerHouse Books, 2004). Tom Terrell is currently working on his photo-journal memoir, Bitches, Blips & Bops: 40 Years Lost in Music.