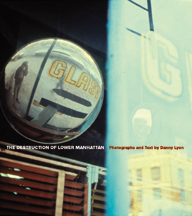 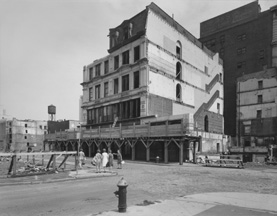 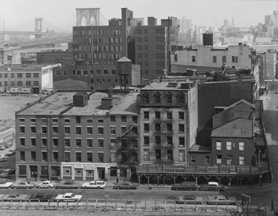 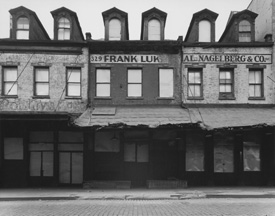 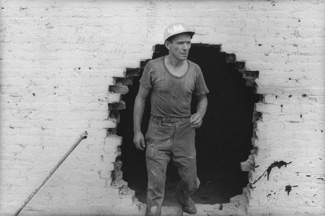 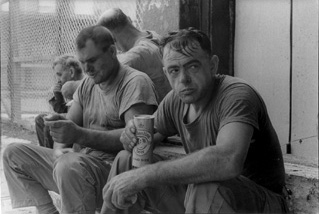 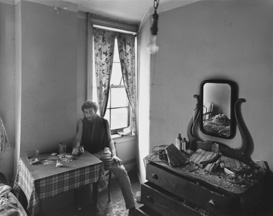 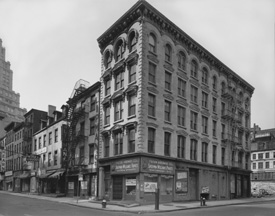 “I came to see the buildings as fossils of a time past. These buildings were used during the Civil War. The men were all dead, but the buildings were still here, left behind as the city grew around them….The passing of
buildings was for me a great event. It didn’t matter so much whether they were of architectural importance. What mattered to me was that they were about to be destroyed. Whole blocks would disappear. An entire neighborhood. Its few last loft occupying tenants were being evicted, and no place like it would ever be built again. The streets involved were among the oldest in New York and when sections of some were closed by the barriers of the demolition men, it meant they would never be opened again.”
—Danny Lyon

In late 1966, Danny Lyon returned to New York City, having just finished The Bikeriders. He was twenty-five. Living in a loft on the corner of Beekman and William Streets in Downtown Manhattan, Lyon saw that half the buildings on Beekman Street were boarded up, about to be demolished. That year an incredible sixty acres of mostly nineteenth-century buildings were slated for demolition, all below Canal Street. The seven-acre site where the Twin Towers would eventually stand was being cleared, a new ramp added to the Brooklyn Bridge, Pace University expanded, and the Washington Market was being moved to the Bronx. Whole sections of Lower Manhattan were being turned into rubble.

Lyon thought of the title The Destruction of Lower Manhattan first, and then made a record of each building before it was demolished. The book was released by Macmillan Publishers in 1969, and remaindered a few years later; the copies sold for one dollar each. It has been a collector’s item ever since.

Thirty-eight years after these photographs were made, many of them are the only record that survives of entire blocks that once lined Fulton Street, and West Street along the Hudson. Because of the disaster that would strike the city a generation later, New Yorkers have taken on a renewed and fervent interest in the architecture of their city. This work is a major contribution to that new world. For Lyon, these buildings in their last days standing were the embodiment of a beauty and pathos that people walking by in the street seldom noticed at the time. Those feelings were preserved in the photographs that today survive exactly as the young author intended, as a memory and a record of what was.

Danny Lyon was born in Brooklyn. While studying history at the University of Chicago, Lyon joined the Student Nonviolent Coordinating Committee as their first staff photographer. One of the best-known photojournalists today, Lyon has produced ten books of photography and an equal number of nonfiction films. His books include, Indian Nations (Twin Palms, 2002), Knave of Hearts (Twin Palms, 1999), a memoir, Memories of the Southern Civil Rights Movement (University of North Carolina, 1992), Merci Gonaives (Bleak Beauty, 1988), an account of the 1986 Haitian revolution, and Conversations with the Dead (Holt, Rinehart and Winston, 1970), the first book by a photojournalist inside the American prison system. He has received a Rockefeller Fellowship in filmmaking, Guggenheim Fellowships for photography and filmmaking, and numerous fellowships from the National Endowment for the Arts. His photographs are in the collections of The Metropolitan Museum of Art, the Whitney Museum of American Art, and the Museum of Modern Art, New York; the Art Institute of Chicago; the Corcoran Gallery of Art and The Library of Congress, Washington, D.C.; as well as other museums throughout the world. Lyon farms in Ulster County, New York and Sandoval County, New Mexico.