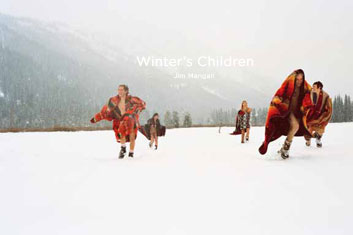 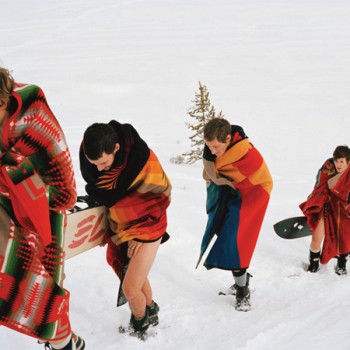 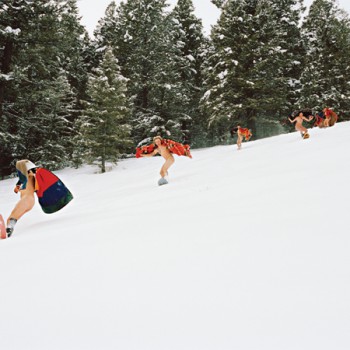 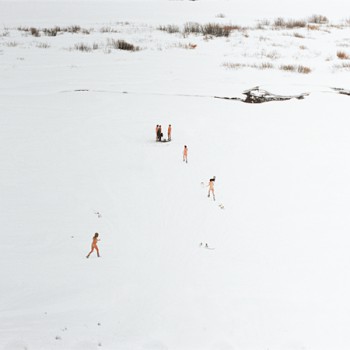 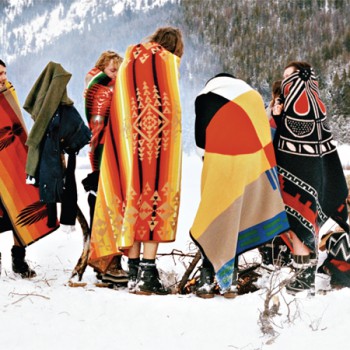 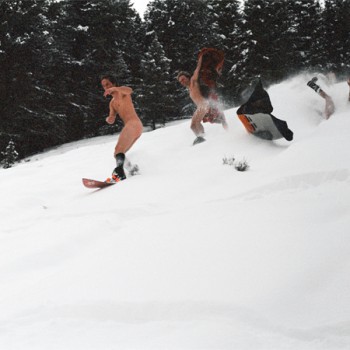 by Jim Mangan
with essays by Peter Line and Peter Sutherland

Simply put, Winter’s Children is a celebration of the pure, naked joy that burns at the heart of snowboarding. Tellingly absent from this unusual series of photographs is the brash consumerism that not merely clutters, but absolutely defines the snowboarding industry today. With an introduction from legendary snowboarder Peter Line, the book serves as both a commentary on the commercial snowboarding industry and a playful hybrid of youth culture and nature photography.

During the winter of 2010, photographer, filmmaker, and former sponsored snowboarder, Jim Mangan, left an 11-year career in the business side of snowboarding and lit out for the remote backcountry of Idaho’s Sawtooth Mountains to recharge and redirect. Accompanying him were seven accomplished snowboarders—including his college friend, Peter Sutherland, now a renowned photographer and artist, as well as rising stars of the sport’s next generation, like Laura Hadar and Alex Andrews. Away from the corporate sponsors, the perfectly manicured terrain parks and halfpipes, and the ever-present audience, the riders literally stripped away all artifice—along with their clothing—in a powerful artistic statement that honors the original roots of the sport.

Using vintage snowboards from the early 1980s, and clad only in vibrant Native American blankets that contrast with the stark winter landscape, the seven riders soared naked and uninhibited down empty slopes. Mangan captures not just the action, but the unfolding of emotion on intentionally grainy 35 mm film that reflects the ethos of snowboarding’s early years. “As I exited the snowboarding business, I wanted to recreate the feelings that originally drew me to the sport,” explains Mangan. “This project is an exaggerated overstatement of those feelings.”

Ultimately, for the photographer, the riders, and the viewers, Winter’s Children becomes a baptism, with the cold snow washing away the neon filth of consumerism and serving as a bracing reminder of snowboarding’s pure origins.

Filmmaker and photographer Jim Mangan grew up in La Grange, Illinois, but headed west to Colorado to attend college and to pursue his passion for snowboarding and the mountains. His first two films, City. Park City. (2006), and I Ride Park City (2008), were both official selections of the X-Dance Film Festival, where they were nominated for multiple awards, including “Best Emerging Filmmaker” and “Best Soundtrack.” After a long career in the snowboarding industry, in which he worked progressively as a sponsored and competitive athlete, terrain park designer, art director, team manager, marketing director, and eventually, a filmmaker, Mangan left the snowboarding business to focus his attention on a series of fine art projects. With the career move came a geographic one; after 16 years in the mountains of Utah and Colorado, Mangan now calls Los Angeles home. Winter’s Children is Mangan’s first fine art and photography project. In 2010 he became a contributor to both Vice magazine and 01 magazine

Peter Line is a professional snowboarder from Bellevue, WA. He is a member of the Forum Snowboarding team and was the founder of the original Forum 8. Line’s biggest contribution to the snowboarding world was the invention of cork and inverted tricks. Line works as a columnist for Snowboarder Magazine and continues to snowboard regularly.