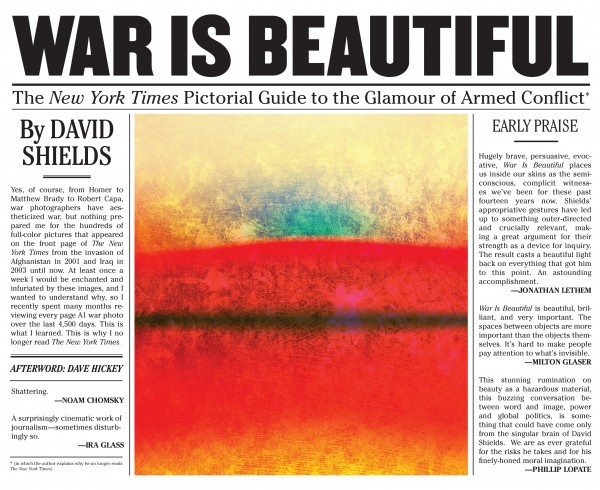 Bestselling author David Shields analyzed over a decade’s worth of front-page war photographs from The New York Times and came to a shocking conclusion: the photo-editing process of the “paper of record,” by way of pretty, heroic, and lavishly aesthetic image selection, pulls the wool over the eyes of its readers; Shields forces us to face not only the the media’s complicity in dubious and catastrophic military campaigns but our own as well. This powerful media mouthpiece, the mighty Times, far from being a check on governmental power, is in reality a massive amplifier for its dark forces by virtue of the way it aestheticizes warfare. Anyone baffled by the willful American involvement in Iraq and Afghanistan can’t help but see in this book how eagerly and invariably the Times led the way in making the case for these wars through the manipulation of its visuals. Shields forces the reader to weigh the consequences of our own passivity in the face of these images’ opiatic numbing. The photographs gathered in War Is Beautiful, often beautiful and always artful, are filters of reality rather than the documentary journalism they purport to be.

David Shields is the internationally bestselling author of 20 books, including Reality Hunger (named one of the best books of 2010 by more than 30 publications), The Thing About Life Is That One Day You’ll Be Dead (New York Times bestseller), and Black Planet (finalist for the National Book Critics Circle Award). Forthcoming are Flip-Side (powerHouse, 2016) and Other People (Knopf, 2017). The recipient of Guggenheim and NEA fellowships, Shields has published essays and stories in the New York Times Magazine, Harper’s, Esquire, Yale Review, Village Voice, Salon, Slate, McSweeney’s, and Believer. His work has been translated into 20 languages.