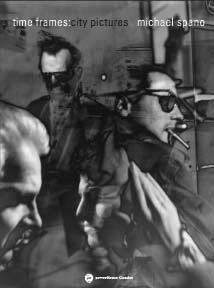 Time Frames, Michael Spano’s long-awaited first monograph, catalogues the artist’s exploration of spatial and temporal dimensions in photography. The book is divided into five chapters: “Panoramas”, “Grids”, “Portraits”, “Multi-Exposures”, and “Diptychs”; each employs a distinctive technical process to provide a new way of looking at life in New York City. “Panoramas” (1977-1983) show interacting urbanites moving through elongated frames as the lens of an extremely wide field camera pans during exposure. “Grids” (1980-1990) captures eight moments on a single negative as Spano moves through a sequence of events, pre-determinedly exposing a portion of the grid every four seconds. “Portraits” (1984-1990) focus on individual inhabitants transformed and etched out from their settings through the solarization and blurring forms into an atmospheric world. “Multi-Exposures” (1985-1998) combine solarizations with multiple perspectives. These single-negative layered compositions orchestrate and compress selected intervals of time and space into one image. “Diptychs” (1998-1999) fuse two distinct moments on one negative where scale, focal planes, and perspectives shift and comprise a dual image of urban spaces.

Michael Spano, former director and curator of the non-profit Midtown Y Photography Gallery, holds and MFA from Yale University and currently teaches at Sarah Lawrence College. He is the recipient of many honors and awards, including fellowships from the New York Foundation for the Arts, CameraWorks, and the John Simon Guggenheim Memorial Foundation. Spano has exhibited his work at The Museum of Modern Art; the Cleveland Museum of Art; Harvard University’s Fogg Museum in Cambridge; The Museum of Contemporary Photography, Chicago; and the Los Angeles County Museum, among others. Represented by the Laurence Miller Gallery, Spano’s work is featured in the collecitons of The Museum of Modern Art, the Whitney Museum, and the Brooklyn Museum of Art; the Cleveland Museum of Art; the Boston Museum of Fine Art; and the Art Institute of Chicago.

Susan Kismaric, a Department of Photography curator at the Museum of Modern Art, has organized many exhibitions and authored numerous catalogues during her tenure, including the book, Judith Joy Ross (The Museum Of Modern Art.)