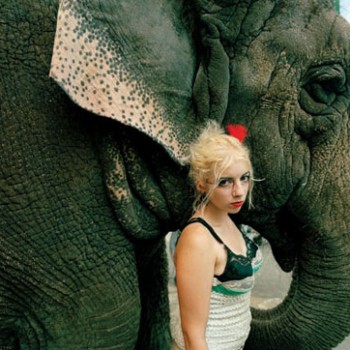 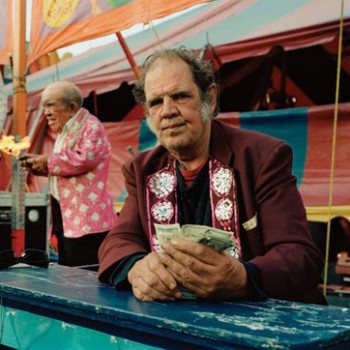 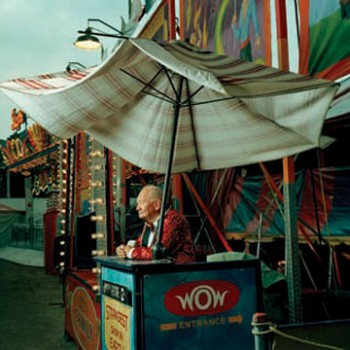 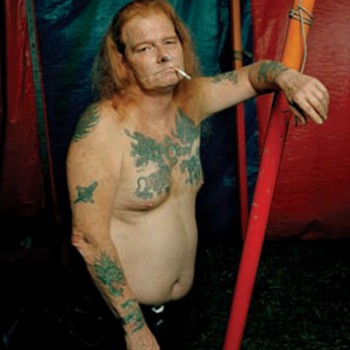 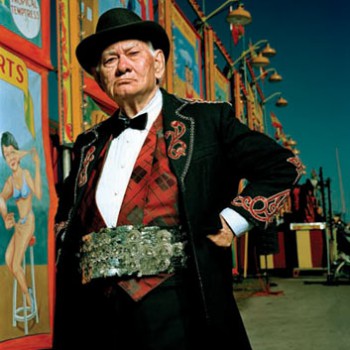 by Jimmy Katz and Dena Katz

by Jimmy Katz and Dena Katz

Working in brilliant color and with a large format camera, photographers Jimmy and Dena Katz spent three seasons following the last authentic traveling side show in America to create this elegy to a uniquely American art form. Their powerful, poignant, and respectful portraits of aging performers and young recruits reveal disappointment, despair, and tenacity played out against the tawdry glitter of the fairground. These images, along with anecdotes and commentary by the performers, are brought together for the first time in World of Wonders.

Sword swallowers, fire eaters, freaks, and illusionists have excited generations of Americans. Today, only this one troop persists, led by the legendary Ward Hall and his partner Chris Crist, who mounted multiple extravaganzas for Ringling Brothers more than fifty years ago. As the photographers listened to hard-luck stories and felt the power of hard-lived lives, they were moved by these men and women who continue to perform despite changing times and tastes.

Born in New York City, photographer Jimmy Katz spent more than a decade based in Utah as a mountaineer and Nordic skier, photographing the desert and mountainous terrain. He often contributed photographs and articles to climbing publications about his expeditions and first ski descents in remote areas of the world. Back in New York, he established himself as a well-known music photographer, shooting over 250 recording projects and more than 60 Jazz magazine covers. Although he lives in New York City, Katz is still closely connected to the American West, where he often finds inspiration for his personal projects.

Dena Katz was born and educated in Moscow, in the former Soviet Union. She met Jimmy Katz during his expedition to the Soviet Pamir, and their relationship developed after she had climbed the highest peak in Europe. Shortly thereafter, she moved to the United States and pursued post-graduate East Asian studies at Columbia University. She has been a conceptualist and collaborator with Jimmy Katz on a number of photographic projects.

powerHouse Books takes you behind the scenes of our the April 2009 release
World of Wonders:

Photographers Jimmy and Dena Katz spent three seasons traveling with the last remaining authentic sideshow in the country, chronicling the fading scene that exists on the fringes on American society for World of Wonders, their second powerHouse Books release. World of Wonders comprises a series of brightly colored and beautifully detailed images of the sideshow performers accompanied by anecdotes revealing the hardships and feelings of despair that plague these sword-swallowers, ventriloquists, snake charmers, lion-tamers, and fire-eaters. Once the primary form of entertainment for those who lived outside of large metropolitan centers, sideshows have since been abandoned as a form of popular entertainment. powerHouse Books sat down with Jimmy and Dena Katz to discuss their lingering attraction.

powerHouse Books: How did you get into photography and what were your early inspirations?
Jimmy Katz: I have been making photographs since I was six years old, when I photographed all the bridges that lead into Manhattan. Later on I studied photography in college, I was, and continue to be inspired by a combination of the spontaneity and decisiveness of Cartier-Bresson and the formality and precision of Ansel Adams. While Dena did not have formal training in photography, her childhood in Moscow in the waning days of the Soviet Union made her particularly sensitive to cultural oddities and defined her creative eye and vision.

pHB: How would you describe your photographic style and how has it developed over the years?
JK: We are able to use our 4 x 5 cameras with the spontaneity of 35 mm. street photographers, which allows us to apply the formality and detail of a large format landscape photograph to each fleeting moment and expression

pHB: What elements of yourself, do you think, reflects in your work?
JK: We both have a rather dark sense of humor and an appreciation of life’s absurdity.

pHB: Your projects are all quite different, how did you come about choosing the World of Wonders?
JK: Our projects explore the post-modern aesthetics of distinctly American sub-cultures. Our subjects illustrate the originality of the American psyche and its eccentric individuality. They may swallow swords and eat fire in a sideshow, but all of these Americans are escaping their prosaic existence and they manage to make a theatrical and personal statement. We read an article on the Internet about a former sword swallower, Johnny Meah, who created the dramatic and colorful banners that advertise the sideshow. More research led us to Ward Hall and his fantastic World Of Wonders. Our fascination grew the more we got to know these performers.

pHB: The photographs for World of Wonders are powerful and you capture something very dark in the faces of your subjects, could you talk to me about these people and their connection to the rest of the World?
JK: These are people who live outside the norm of the American mainstream. Old and young choose to do this for various personal reasons, but what you see in their faces reflects the difficulty of living life on the road, persisting in a dying art-form, and being a showman with a certain strength and pride. Yet, despite the theatricality of the show, there was honesty and humor in their humanity, and caring in their complex relationships with each other.

pHB: Why do you think sideshows have lost popularity in this country?
JK: Over the years the modern world has developed many competing entertainments, and a traditional sideshow like the World of Wonders has an old fashioned feeling. It’s kind of frozen in time and has not adapted to modern tastes. Children who have been exposed to high tech video games are not going to be impressed by a man jumping out of a cage in a gorilla suit.

pHB: Could you talk to me about what World of Wonders represents for you?
JK: We have been on a personal journey to discover changing American sub-cultures—ordinary people expressing themselves with passion and intensity in extraordinary ways—and this project is an essential part of the journey because it is the last of its kind.