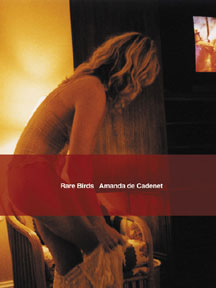 Rare Birds, the first monograph by Amanda de Cadenet, is a ten-year retrospective documenting the provocative cast of characters she has encountered through the course of her life and travels. These intimate images, published here for the first time, present us with a disarming array of personalities. Defying superficial interpretation and representation, Rare Birds humanizes our pop culture idols, placing them alongside equally compelling people from everyday life.

Amanda de Cadenet began her eclectic career in London at age fourteen as the host of a successful talk show, and later relocated to Los Angeles to raise her daughter and pursue acting. After starring in several films it became apparent that life behind the camera was what motivated de Cadenet. She promptly began to capture the cast of characters surrounding her with a secondhand Leica M6, and a new career began to take shape. Today, de Cadenet’s portraits and fashion images appear in such publications as Vogue, The New York Times Magazine, i-D, Allure, Spin, and Rolling Stone. Currently residing in New York with her daughter and boyfriend, she is working on directing her first film.

Sophie Dahl was born in England and grew up in both
London and New York. Dahl has been an internationally renowned model for the past ten years. She is the author
of the novella The Man with the Dancing Eyes (Bloomsbury, 2003), which has been translated into many languages.
Dahl has contributed to magazines and newspapers including Vogue, The Telegraph, and The Times of London, as well as the anthology Truth or Dare (Picador, 2004). She lives in New York, where she is currently writing her first novel.