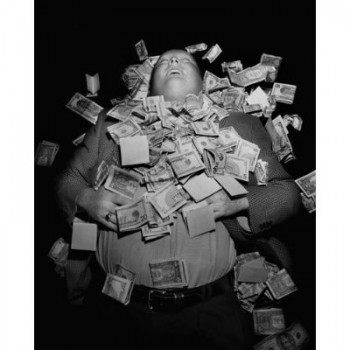 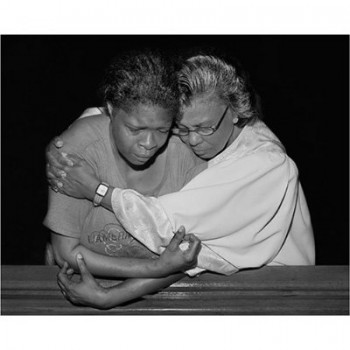 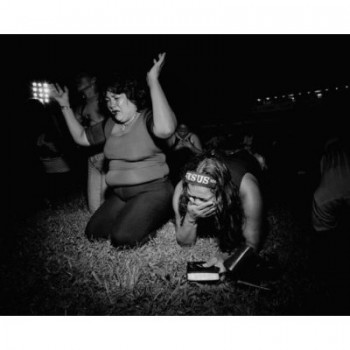 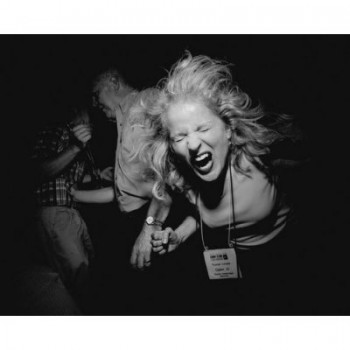 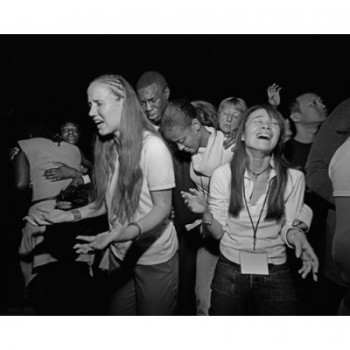 “[Katzman’s photographs] are as striking and powerful as anything brought back from a Vodoun ceremony in Haiti, or a primitivist church in Sicily. Yet they make no pretense of the documentarian’s ethnological distance; they’re snapped right there in the midst of the action—in the center of the mosh pit, let’s say—and convey a raw, uncensored passion clearly indicating that the photographer himself has felt something of the experience that has swept these people up.”
—New York Press

Responding with intrigue to a newspaper ad that pleaded, “Come to the Miracle Tent. Come witness the blind see, the crippled walk, the deaf hear,” photographer Steven Katzman, raised a conservative Jew, began photographing Christian revivals around his hometown of Sarasota, Florida. Katzman was then invited to visit the revival center of Christian America—the Brownsville Assembly of God, in Pensacola. There, Katzman found a pious evangelical community where God’s presence is constantly witnessed in the immeasurable force of the congregation’s expressions of religious ecstasy: the laying of hands, the screams and tears of joy and anguish and love as men and women are purged of suffering and sin. The congregation would rise to the point of collapse, lamenting and praying for those less fortunate in the world, being healed by the ever-present love of the faithful and the Lord. As Katzman peered through the lens of his camera, he also heard the desperate calls of the preacher: “Faith has no religion. Do I hear an Amen?” Katzman found what no one had expected—his faith.

With sumptuous black-and-white photographs that recall the religious fervor of El Greco and the anguish of Francis Bacon, The Face of Forgiveness: Salvation and Redemption takes us inside evangelical meetings across the world and bears witness to the driving emotional faith of Christian revival, where emotion and love pours from the eyes and mouths of the faithful, praying and thanking the Lord.

Steven Katzman, a self-taught photographer, has received grants from Eastman Kodak, Ilford, and Polaroid, to name a few, and was awarded a Gold ADDY Award for his work. His photographs are included in the permanent collections of the BBC Archives, London; the George Eastman House International Museum of Photography and Film, Rochester; the Mütter Museum, Philadelphia; and the Erna and Victor Hasselblad Foundation, Göteborg, Sweden. Katzman lives in Sarasota, Florida.

A.D. Coleman’s internationally syndicated columns and essays have appeared in Artforum, ARTnews, The New York Times, the New York Observer, and The Village Voice and have been translated into twenty-one languages. Coleman has published numerous books including Depth of Field: Essays on Photography, Mass Media, and Lens Culture (University of New Mexico Press, 1998), The Digital Evolution: Visual Communication in the Electronic Age (Nazraeli, 1998), and Tarnished Silver: After the Photo Boom (Midmarch, 1996). His awards include an International Center of Photography Infinity Award for Writing on Photography in 1995. Coleman lives on Staten Island.

Bill Johnson is a fifth-generation pastor with a rich heritage in the things of the Holy Spirit. Together Bill and his wife serve a growing number of churches that have partnered for revival. This leadership network has crossed denominational lines, building relationships that enable church leaders to walk successfully in both purity and power. Bill and Brenda (Beni) Johnson are the senior pastors of Bethel Church, Redding, California. All three of their children and spouses are involved in full-time ministry. They also have four wonderful grandchildren. He is the author of When Heaven Invades Earth: A Practical Guide to a Life of Miracles (Destiny Image Publishers, 2003) and The Supernatural Power of a Transformed Mind: Access to a Life of Miracles (Destiny Image Publishers, 2005). Johnson lives with his wife in Redding, California.