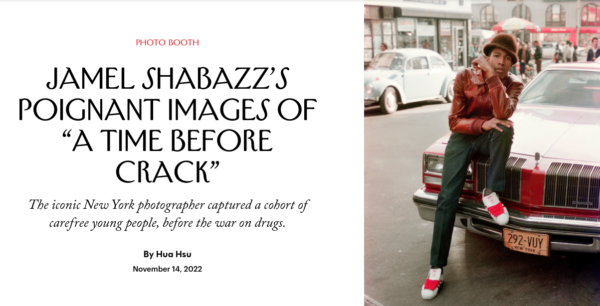 The New Yorker published a feature article in its Photo Booth section featuring the career of photographer Jamel Shabazz and his most recent book, A Time Before Crack (powerHouse Books, Fall 2022).

“In the nineteen-eighties, Jamel Shabazz would walk the streets of his native New York with his camera, photographing young Black and brown people wherever he encountered them—on corners and park benches, in phone booths or barber shops, leaning against cars or friends, waiting for the subway, cradling newborns or shopping bags, crews of kids with their arms around one another or in the middle of elaborate, secret handshakes. He took their pictures, arranged to share a copy with them, and kept it moving. “I don’t want anything in return,” he recalls telling his subjects. “Just going to record this moment in time ’cause I see your greatness.”

Twenty years later, Shabazz went through his archives for a book project, and thought about how distant these images of carefree optimism now felt. He had spent the intervening two decades working as a corrections officer, seeing firsthand the ravages of the crack epidemic and the war on drugs. Yet these photos captured a cohort of young people right before all of it. They live in a tenuous moment of possibility, making the most of what they have, laughing and smiling, free to look goofy. Shabazz first gained notice as a photographer by publishing “Back in the Days,” a street-level look at early hip-hop culture. But he felt the images that would make up this new book communicated something different, like a period of calm before a generational storm. He was conscious that a book evacuated of context might be “too commercial”; he didn’t want people to misread this as a time capsule of street-style fashions. He called the book “A Time Before Crack.””