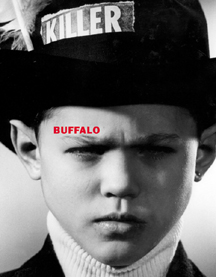 Buffalo quietly defined the look of 80s youth culture, especially in the UK, and this legacy of an uncompromisingly urban style has since inspired legions of designers, stylists, and photographers who were part of the gang, but who absorbed and understood the images and references and made them their own in cities the world over. From the simple combo of the ubiquitous MA-1 flight jacket and an old pair of Levi’s (Ray’s own uniform), to the rarified clothing produced by cutting-edge designers, Petri’s legacy of style—and the Buffalo stance—is still alive and making its presence felt on the biggest catwalk of them all: the street.

Many people have defined the 80s as the decade in which style triumphed over substance, but Petri’s work under the Buffalo “label” was, in many ways, the antithesis of what was dubbed the “matte-black designer decade.” Like the magazines The Face, i-D, and Arena, which showcased Petri’s work, Buffalo was far more logically a product of the DIY post-punk aesthetic than it was an embodiment of the self-consciously slick 80s image-making. Buffalo was, first and foremost, about a certain kind of hip, urban attitude—one not for sale in stores, but yours to create.