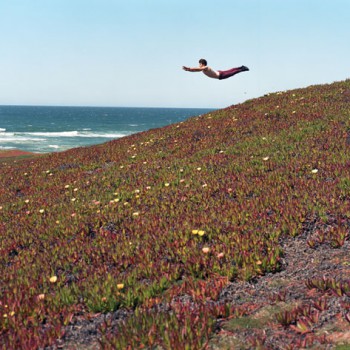 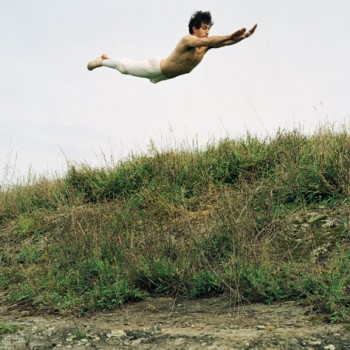 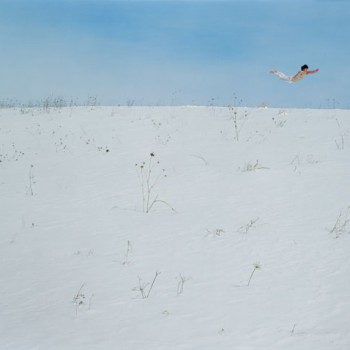 “A straight photograph is an exact representation of a segment of space and time circumscribed by the physical and optical limitations of the medium. So, although the representation is exact, because of the circumscription, it is also a visual fiction. Daniel Gordon explores this boundary with inventiveness, playfulness, and physical stamina.”
—Stephen Shore

“The artist’s short, gravity-killed glides are real, though his fantastical pictures suggest that such computer-based trickery might have been used.”
—The Dallas Morning News

“On a fundamental level, the art of photography is about the miracle, and how to make the ordinary extraordinary. These pictures do that in it’s purest form. They capture suspended moments, perfectly situated between transcendence and doom.”
—Gregory Crewdson

Between 2001 and 2004, on the snowy fields in New York’s Hudson Valley and the rocky coasts of the Bay Area in Northern California, photographer Daniel Gordon learned to fly—if only for 1/125 of a second. Using a camera mounted on a tripod, Gordon frames his picture. He then runs out onto the landscape and launches himself into the air, while an assistant snaps the shutter. The images in Flying Pictures are at once pastoral landscapes and documents of a performance. Only after considering them for a while, does the thought occur that their fleeting bliss was swiftly met with physical doom—a crash back to Earth. Such a journey requires great humility as well as hubris, and a will to achieve the impossible if only for a moment. The project began at a time when digital technology was changing the role that truth has historically played in the media of film and photography. The ease with which one could now alter an image with Photoshop created a new sense of paranoia concerning the veracity of photographs. Flying Pictures’ unbelievable, unaltered images reveal that there never was just one truth in photography.

Daniel Gordon was born in Boston in 1980 and raised in San Francisco. He received a BA from Bard College in 2004, and an MFA from Yale School of Art in 2006. He has exhibited his photographs in solo exhibitions at Zach Feuer Gallery in New York City, Angstrom Gallery in Dallas, and Groeflin Maag Gallery in Zurich. He has been included in exhibitions at the CCS Galleries at Bard College, and Gallery 400 at the University of Illinois. He is currently a Visiting Professor at Sarah Lawrence College. Gordon is the author of Portrait Studio (onestar press, 2009), and has been a contributor to Columbia: A Journal of Literature and Art as well as Esopus magazine. He lives and works in Brooklyn, NY.

Gregory Crewdson holds an MFA in Photography from Yale School of Art. His work has been the subject of multiple solo exhibitions in the U.S. and abroad, and is in the collection of the Guggenheim Museum, New York; The Museum of Contemporary Art, Los Angeles; The Art Institute of Chicago; the Metropolitan Museum of Art, New York; and The Museum of Modern Art, New York among others. Monographs of his work include, Twilight: Photographs by Gregory Crewdson (Harry N. Abrams Inc., 2003) and Gregory Crewdson: Dream of Life (Ediciones Universidad De Salamanca, 2000). He lives and works in New York City.