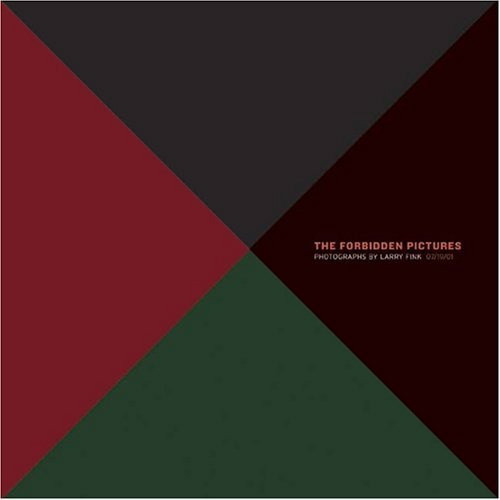 “It was time—the election was stolen, robbed by middle-men on top. Folks who though the past was the future because they owned the present. Entitlement didn’t come from being lazy; it came from cunning, aggrandizing connivance. The leader was a twice entitles frat boy, a thick-headed intellectual goon, with charisma informed by homily and stubborn gotcha comfort.”
—Larry Fink

Originally conceived as a scathing comment on the 2000 presidential election, The Forbidden Pictures by Larry Fink were set to run in The New York Times Magazine in the fall of 2001. Then, after the tragic events of September 11 and the ensuing reluctance for criticism found in the media and general public, these images remained largely unseen until their exhibition, first at Lehigh University, Pennsylvania in the spring of 2004, then the following summer at The powerHouse Gallery, New York, timed with the Republican National Convention. Published for the first time in The Forbidden Pictures, Fink’s tableaux set Bush administration look-alikes in the opulent world of Weimar-era painting, referencing the decadent depictions of painters Max Beckmann, George Grosz, and Otto Dix.

Included in the catalog is a selction of outraged emails by hostile conservatives in response to the Lehigh exhibition. Equating the images with the 2004 Super Bowl halftime show, one writer declared, “…this is not art! It is DISGUSTING…” Standing in sharp contrast to the populist opinion, Graydon Carter’s essay declares that Fink’s photographs, “…remind us that after a war based on deception, the tearing away of our civil rights, and the atmosphere of unprecedented secrecy surrounding the White House, it’s no longer liberal hysteria to say that we’re living under the governace of what can reasonably said to be an imperial presidency.” Presenting both sides of the political spectrum, The Forbidden Pictures is a document of—and in fact a response to—the extremities of rhetoric and partisanship that continue to characterize American politics.

Larry Fink, the acclaimed photojournalist and educator, was born in Brooklyn in 1941 and studied photography with Alexey Brodovitch and Lisette Model at the New School for Social Research in New York. Currently a professor at Bard College, he has taught photography at Yale, Parsons School of Design, and New York University. He is represented by Bill Charles Inc. Fink has had solo exhibitions at the Museum of Modern Art, New York, as well as major retrospectives at Les Rencontres de Photographie, Aries, France; Musee de L’Elysee, Lausanne, Switzerland; and Musee de la Photographie, Charleroi, Belgium. His photographs have appeared in The New York Times, Art in America, Vanity Fiar, Vogue, Time-Life Books, The New Yorker, and The Village Voice. The author of Boxing, Runway, and Social Graces (powerHouse Books, 1997, 2000, and 2001, respectively), Fink lives on a farm in Martin’s Creek, Pennsylvania.

Graydon Carter has been editor of Vanity Fair since July 1992. During his tenure, Vanity Fair has won six National Magazine Awards, including two for general excellence for magazines with a circulation of more than one million, the highest honor in magazine publishing. Carter has been named Advertising Age’s editor of the year and is the first editor ever to be twice named Adweek magazine’s editor of the year. Prior to joining Vanity Fair, he worked as editor at The New York Observer and Spy, which Carter cofounded in 1986. He has also worked as a staff writer for Time and Life magazines. He is the author of What We’ve Lost (Farrar, Straus & Giroux, 2004) and the editor of Oscar Night (Knopf, 2004) and Vanity Fair’s Hollywood (Abrams, 2000). Carter was an executive producer of 9/11, the highly acclaimed film that aired on CBS in 2002, for which he received an Emmy and a Peabody Award. Born in Toronto, Canada, Mr. Carter resides in Manhattan.