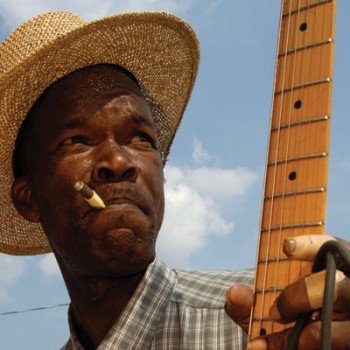 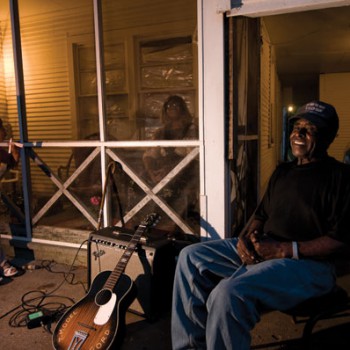 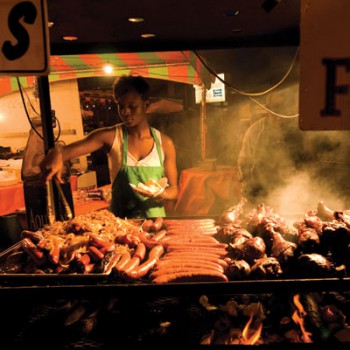 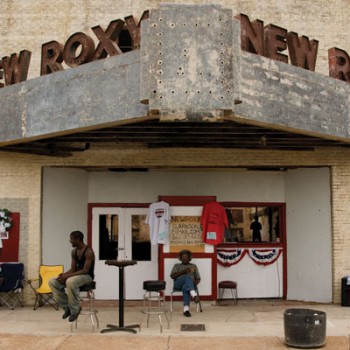 “The Mississippi River Delta is flat country. Not a hill in sight. It is often way too cold or way too hot. But there is a subtle beauty to it. Large plantation owners used to rule this delta country and I imagine what it my have been like 100 years ago. I can almost smell the history as a thunderstorm rolls loud and black across the flats, creating waves in the wheat fields resembling a green tumultuous sea.

“From these former cotton fields came a new art form. Out of commerce, out of slavery, out of greed, out of necessity, out of Africa, came the BLUES. Yes, the music: blues, jazz, rock n’ roll, and rap came from these cotton fields. Out of these cotton fields and out of these little one-room churches came the voice of an enslaved people. The voice of the men and women that toiled in these fields is the blues, and it is still a voice heard around the world.”
—David Alan Harvey

Blues, Booze, & BBQ, the first book by Michael Loyd Young, documents the 150 miles of Highway 61, the famed blacktop road snaking from Memphis, TN down to Greenville, MS. At the halfway point, in the heart of the Mississippi Delta, sits Clarksdale, MS, the city considered the birthplace of the blues and the location of Robert Johnson’s famed “Cross Road Blues” intersection of Highway 61 and 49.

The Delta has been home to blues legends such as Charley Patton, John Lee Hooker, Muddy Waters, Howlin’ Wolf, Ike Turner, Cadillac John Nolden, B.B. King, T-Model Ford, Mississippi Slim, Big Jack Johnson, and Willie King, among countless others whose music has become the glue that holds these communities together as they struggle to survive. Young’s photographs, taken at juke joints, in private homes, or just hanging out, illustrate the bond blues creates between the Delta and its people. It is through this music that the people pass on their heritage and culture to future generations.

Michael Loyd Young lives in Houston, TX. Since 2002 Young has worked on several projects, traveling to 21 different countries documenting cultural symbols and the impact they have on the daily lives of the people he photographs. This is Young’s first book. All proceeds will be donated to the Delta Blues Museum in Clarksdale, MS. He is currently working on his second book documenting the hunting and fishing culture along the Gulf Coast, from southern Texas to the Florida Everglades.

David Alan Harvey discovered photography at an early age and quickly began photographing his family and neighborhood. At 20 Harvey lived with, and documented the lives of a black family living in Virginia. These photographs were published in his first book, Tell It Like It Is. Harvey went on to shoot over 40 essays for National Geographic Magazine and publish Cuba (National Geographic, 2000), Divided Soul (Phaidon, 2003), and Living Proof (powerHouse Books, 2007). Harvey has been at Magnum Photos since 1993 and lives in New York.

Author proceeds will be donated to the Delta Blues Museum.