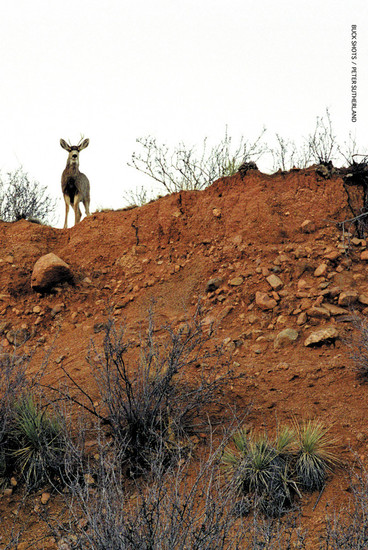 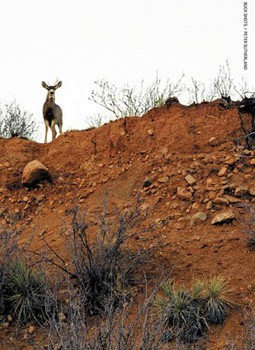 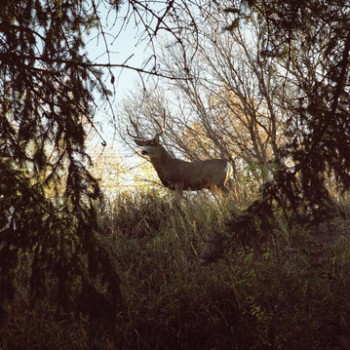 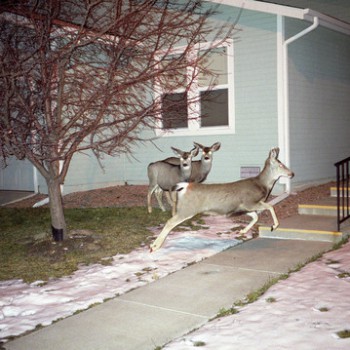 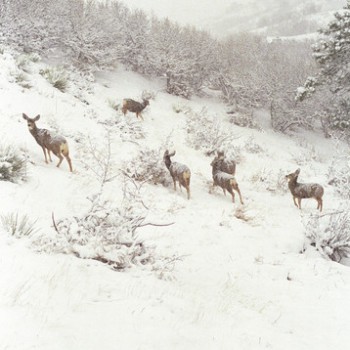 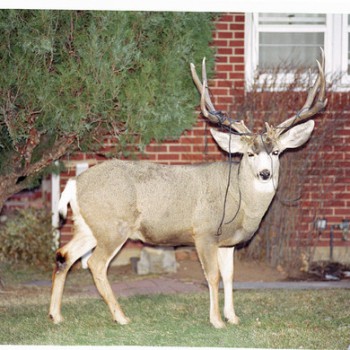 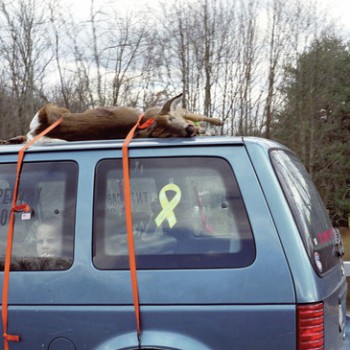 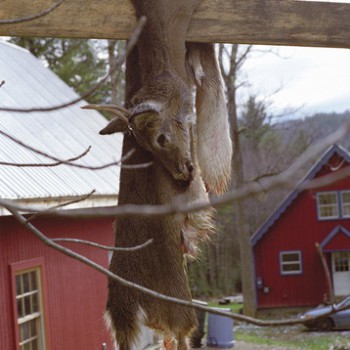 Artist’s Book / Young Bucks / Out There

“The normal response to Peter Sutherland’s photographs of deer would probably be a feeling of sadness, or possibly regret. How is it, one might ask, that nature has become so utterly banal? How depressing that wild animals drink out of storm drains and die beside freeways. Yet deer haven’t exemplified wildness and wonder since the days of Robert Burns: one step above squirrels and raccoons, deer have long been a suburban commonplace. I think there are plenty of natural calamities worth getting riled up about and that photographs might even assist us in doing so; but a deer strapped to the top of a mini-van is not one of them, and to picture this is simply to witness another image from the human comedy.

“Indeed, I find Peter Sutherland’s photographs to be quite funny. His deer exude an infectious self-serious absurdity, going about their deer-like business regardless of obstacle or inconvenience. Their incongruity is exaggerated to the point where these ordinary animals seem to be nothing less than visitors from another world, transfixed and radiating a cosmic light, with bright, sci-fi eyes that seem about to blaze right out of their heads. With an almost total absence of humans, in Sutherland’s images the deer have inherited the earth.”
—Lawrence R. Rinder

Having escaped domestication, deer are on their own, rolling with what comes. They can travel in small packs or they can be alone. They grow long coats when it’s cold; they shed and sit in the shade when it’s hot. They can survive on available food in the woods while the more tame ones will eat Doritos out of your had on the side of the road.

Peter Sutherland doesn’t hunt but he understands the thrill of the chase. The deer tend to come out at dusk when the light is just right. They sneak around and crossover into suburban lands. The boundaries between man and deer have blurred. They watch us while we watch them.

Filmmaker and photographer Peter Sutherland was born in Ann Arbor, Michigan, and raised in Colorado. A move to New York City in 1998 prompted his first feature documentary, Pedal, which premiered at the South by Southwest Film Festival in 2001 before airing on Sundance Channel and being published by powerHouse Books in 2006 as a book and DVD package. The author of Autograf: New York City’s Graffiti Writers (powerHouse Books, 2004), Sutherland has also published artist’s books with Nieves, Art Beat Press, and P.A.M. Books. Sutherland was director of photography on Stoked: The Rise and Fall of Gator, which premiered at the 2003 Sundance Film Festival and was released theatrically by Palm Pictures in August 2003. His second film, which he co-directed with Jack Youngelson, is called Tierney Gearon: The Mother Project, is currently airing on the Sundance Channel.

Duncan Hamilton is an artist and designer based in New York City. He runs White Diamond Projects and is currently working on a film about Mohammed Reza Pahlavithe, the Shah of Iran.