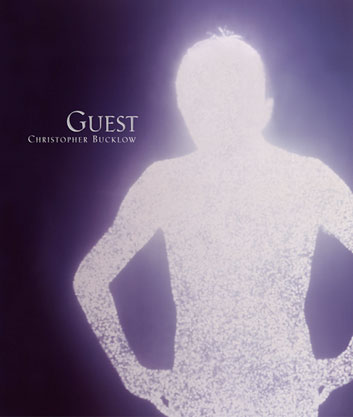 EDITION OF 300. INCLUDES A SLIPCASED, FOIL-STAMPED COPY OF THE BOOK AND A SIGNED AND NUMBERED COLOR PRINT

“These ‘guests’ are spooks for our time, a New Age vision of the body as energy that is also a specter of nuclear fusion.”
—Kenneth Baker, San Francisco Chronicle

“[Bucklow’s photographs] create the impression of presences that seem both three-dimensional and immaterial—more like auras than physical objects. I am reminded of photographs taken a century ago featuring see-through presences that purported to be wraiths or spirits. Bucklow doesn’t make any such claims: but the fact that the head is usually the lightest part of the image suggests that he is trying to portray something other than the body—intelligence, awareness, the spirit; call it what you will.”
—Sarah Kent, Time Out London

Known for his silhouettes made using a pinhole camera, Christopher Bucklow’s first monograph, Guest, collects for the first time many works from the Guest and Tetrarchs series. It also documents his earlier photographic work and video images made within the Canopic Fusion Reactor—a pinhole camera the size of a building, built in St. Ives in Cornwall, England, for the total eclipse of the sun, visible there in 1999.

Coinciding with the publication of Guest by Christopher Bucklow, the Smithsonian Cooper-Hewitt, National Design Museum in New York City will host a celebration of twelve years of Blind Spot Magazine and Blind Spot Books in September 2004.

Maria Morris Hambourg is Head of the Department of Photographs at The Metropolitan Museum of Art, New York. Hambourg has written on Eugène Atget and curated large-scale photography retrospectives including “A Waking Dream” in 1993. She lives in New York.

David Alan Mellor has written extensively on Francis Bacon and contemporary art. His book, The Sixties (Philip Wilson, 1997), accompanied a major survey exhibition at the Barbican gallery, London. Mellor is professor of the History of Art at the University of Sussex. He lives in Brighton, England.