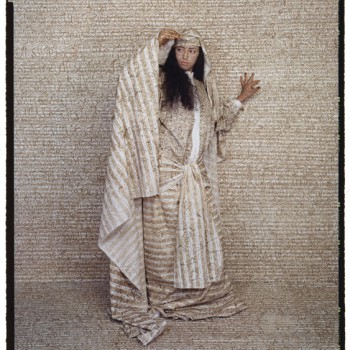 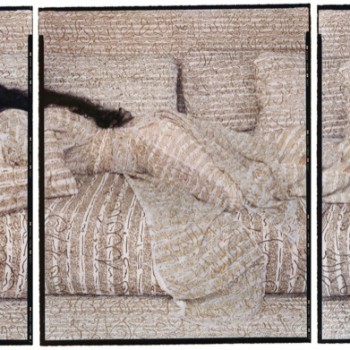 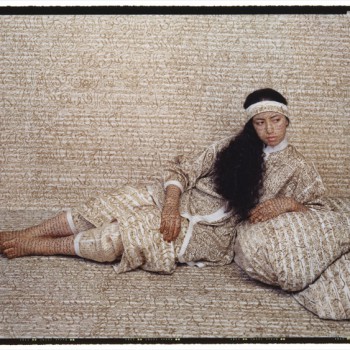 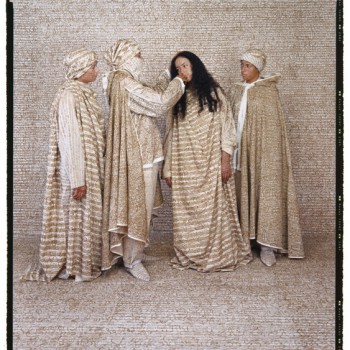 “I am a book that has no ending. Each page I write could be the first.”
—Lalla Essaydi

Haunted by space both actual and metaphorical, remembered and constructed, Lalla Essaydi’s work reaches beyond Islamic culture to invoke the Western fascination with the veil and the harem as expressed in nineteenth-century Orientalist paintings with the odalisque. The world that Western artists encountered in North Africa was suffused with the exquisite beauty of the architecture, the interior décor, and women’s clothing. It is this beauty that Moroccan-born artist Essaydi reclaims in Les Femmes du Maroc, her second powerHouse Book.

Essaydi’s work revisits the world of women, suggesting the complexity of feminine identity and the tension between hierarchy and fluidity that are at the heart of Arab culture. Not simply a critique of either Arab or Western culture, Essaydi’s photography offers a more active, even subversive engagement with cultural patterns to convey her own experience as an Arab woman.

In these images, the text adorning the women’s bodies is partly autobiographical. Essaydi speaks her own thoughts and experiences directly, as a woman caught between the past and present, between East and West, and also as an artist, exploring the language in which to “speak” from this uncertain space. Without specificity of place, the text itself becomes the world of the subjects—their thoughts, speech, clothing, shelter, and nomadic home. However, this text is incomplete. It involves the viewer as well as the writer in a continual process of reading and revising, of losing and finding in its multiple and discontinuous threads. Similarly, the women in the photographs require multiple visual readings. Both are as elusive as “woman” herself—not simply because she is veiled but because she is still in progress.

Lalla Essaydi received a BFA from Tufts University in 1999 and an MFA from the School of the Museum of Fine Arts, Boston and Tufts University in 2003. Essaydi’s most recent work uses analog photography, but she also works in oil on canvas, mixed media, and video. The author of Converging Territories (powerHouse Books, 2005), Essaydi has exhibited at Edwynn Houk Gallery and Laurence Miller Gallery, New York; Schneider Gallery, Chicago; Howard Yezerski Gallery, Boston; the Fries Museum, the Netherlands; the Art Institute of Chicago; The New Britain Museum of Art; the Columbus Museum of Art; The National Museum of Singapore; and the Danish Center for Culture and Development, Denmark, among others. Essaydi was born in Morocco and currently lives in New York.

Fatema Mernissi is a Moroccan feminist writer and sociologist. She has done research for UNESCO and ILO, published articles on women in Morocco and in Islam at large, and written books including The Veil and the Male Elite: A Feminist Interpretation of Islam (Basic Books, 1992) and Dreams of Trespass: Tales of a Harem Girlhood (Addison-Wesley, 1994).