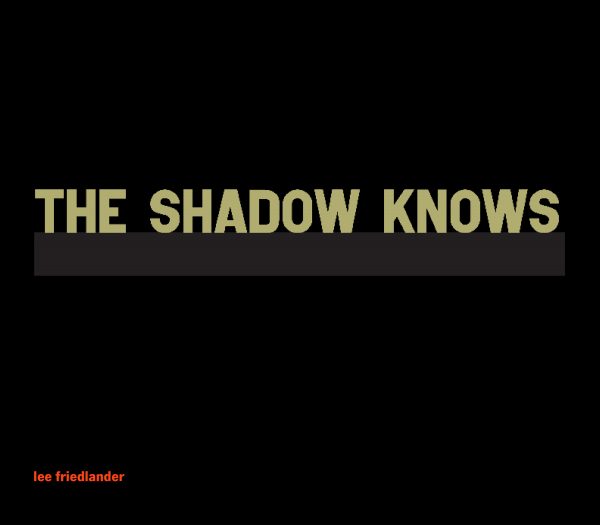 Known for his unorthodox self-portraits, Lee Friedlander has given us another collection, but this time only in shadow, with The Shadow Knows, a reference to the 1930’s radio show that ended with the line: “Who knows what evil lurks in the hearts of men? The Shadow Knows.”

Sometimes Friedlander’s shadow is presented as ominous — imposed over another person, sometimes his wife — lending the impression of sneakiness, desire, or possession. Other times it’s playful, draped over a cactus or a pile of rocks, turning the photographer into a cartoon character with exaggerated body parts. And sometimes he simply makes himself part of a scene, often where you can make out the camera held up to his eye — the photographer’s version of breaking the fourth wall.

One thing is clear throughout the book: his shadow is treated as an honored guest, and Friedlander takes full advantage of the company, tirelessly finding ways of adapting it to his own drama. Historian and curator Rod Slemmons once wrote that Friedlander “provides us with a new visual world in which obstruction, confusion, and accident are the driving forces” — a statement never more evident than in this book.

Friedlander, you imagine, has discovered not just the evil and not just in the hearts of men, but something more profound in his own, and in these 101 photographs shows us what it has come to know.

Born in Aberdeen, Washington in 1934, Lee Friedlander began photographing at the age of fourteen. In 1967, Friedlander’s work was included in the highly influential New Documents exhibition, curated by John Szarkowski at the Museum of Modern Art. Two years later, he would publish his first of 51 books (to date), beginning a career of extraordinary photographic production.

Embracing each subject with equal passion, Friedlander has photographed nearly every facet of American life from the 1950’s to the present, from factories in Pennsylvania, to the jazz scene in New Orleans, to the deserts of the Southwest. To describe his interest in photographing America and its people, he coined the term “the American social landscape” in an interview in 1964.

Over the past five decades, Friedlander’s work has been exhibited at the Whitney Museum, the Guggenheim Museum, the Metropolitan Museum of Art, the San Francisco Museum of Modern Art, the Corcoran Gallery of Art, as well as dozens of other institutions in the United States and around the world. In 2005, Friedlander was the subject of a major traveling retrospective and catalogue organized by the Museum of Modern Art, the first of its kind for a living photographer. Among the many awards he has received are three Guggenheim Fellowships, three National Endowment for the Arts Grants, a Hasselblad Award, and a MacArthur Genius Grant. He was also awarded honorary degrees from Yale University, the University of Pennsylvania, and Pratt Institute.

At 86 years old, Friedlander continues to produce work, publishing multiple books and exhibiting his work nationally and internationally every year.

SPQR Editions is a boutique publisher of curated photography books based in Brooklyn, NY. The advocacy for quality in books is apparent in the mission of SPQR, which stands for Senatus Populusque Romanus, “The Roman Senate and People,” and its commitment to being a nonprofit corporation. In order to be made more accessible to the public, the books are made in the highest quality possible—handsomely printed in duotone ink at a local industria Grafica SiZ in Verona, Italy.